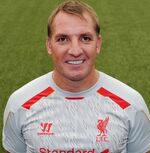 Brendan Rodgers (born 26 January 1973) is a Northern Irish football manager who is currently the manager of Liverpool F.C. He left Swansea City to sign a three-year deal with the Reds on 31 May 2012, following the departure of Kenny Dalglish on 16 May 2012. He took over a Liverpool team that had failed to qualify for the Champions League for three seasons in a row, and had developed frustrating goalscoring problems. Whilst trying to implement his possession-based philosophy at Liverpool, his first season in charge was wrought with difficulty as he was unable to guide his team into the top half of the table until December. The season ended encouragingly, however Rodgers could only lead the Reds to a 7th placed finish. In his second season in charge, Liverpool improved markedly as they finished runners-up in the Premier League, just two points behind Champions Manchester City, but sealing their Champions League return. Rodgers oversaw the development of Liverpool into one of the most prolific attacking teams in Europe, and was rewarded with the LMA Manager of the Year award for the 2013-14 season. In the 2014-15 season however, Liverpool regressed to the performances shown under Kenny Dalglish, and the Reds finished 6th in the League, scoring just 52 goals. (more...)