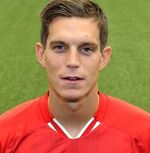 Daniel Munthe Agger (born 12 December 1984) is a Danish footballer who played for Liverpool as a central defender. At 21-years-old, Agger was signed by Rafael Benitez for £6,000,000 on 12 January 2006 from Danish club Brondby- the highest fee paid by Liverpool for a defender at the time. He quickly found himself in the first team and collected winner's medals from both the 2005-06 FA Cup and 2006 Community Shield within his first few months of life on Anfield.

Although Agger's career on Merseyside was disrupted by various injuries, he was always regarded as one of the finest centre backs at the club during his time there. In addition to his defensive prowess, Agger was renowned for his technical ability and fierce shot on goal. In the 2011-12 season, Agger enjoyed a rare season that was largely injury-free, briefly forming a much-lauded central defensive partnership with Martin Skrtel that kept Liverpool legend Jamie Carragher on the sidelines for the first time in his 15-year career. From there-on, Agger cemented his place as one of the club's first-choice centre backs, putting his injury problems behind him. Despite succeeding Carragher as Liverpool's vice captain in the 2013-14 season, Agger's stock at Liverpool gradually declined during the tenure of manager Brendan Rodgers. Although Agger reportedly had rejected moves to clubs such as Barcelona and Manchester City in order to stay loyal to Liverpool, he eventually agreed to a move back to his boyhood club Brondby on 30 August 2014. (more...)

Retrieved from "https://liverpoolfc.fandom.com/wiki/Template:Featured_Article/September2014?oldid=20042"
Community content is available under CC-BY-SA unless otherwise noted.