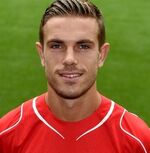 Jordan Brian Henderson (born 17 June 1990) is an English international footballer who plays as a midfielder for Liverpool. He was signed from Sunderland as a 20-year-old for an eye-catching fee in the region of £16,000,000 on 9 June 2011. His Anfield career began slowly- he was often deployed on the right flank by Kenny Dalglish and he was frequently criticised for being 'anonymous' in matches. He struggled to maintain his place in Liverpool's midfield pecking order, and in the summer of 2012, was reportedly even offered to Fulham in exchange for forward Clint Dempsey by Brendan Rodgers when the Northern Irishman replaced Dalglish. Soon however Henderson fought his way back up the pecking order, and he became an increasingly-important member of Liverpool's central midfield. Consistently praised for his attitude in training and incredible work ethic, Henderson's effort and stamina on the pitch saw him become a fan favourite. Under the guidance of Rodgers, Henderson's technical and tactical ability began to develop rapidly while he also developed more on a personal level, becoming demonstrably more authoratative and commanding on the field of play. By the start of the 2014-15 season, he was widely considered one of the most important members of the Liverpool squad and crucial to the success of the style of football Rodgers wished his team to play. After the departure of Daniel Agger, the vice captaincy position opened up and Henderson was a popular choice to fill the role. The club confirmed Henderson as Liverpool vice captain on 15 September 2014. (more...)

Retrieved from "https://liverpoolfc.fandom.com/wiki/Template:Featured_Article/October2014?oldid=20241"
Community content is available under CC-BY-SA unless otherwise noted.