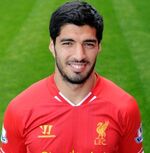 Luis Alberto Suárez Díaz (born 24 January 1987) is an Uruguayan international footballer who currently plays as a forward for Liverpool and the Uruguayan national team. Despite a relatively short career at the club to date, Suarez has developed himself into one of the most talked-about figures in English football. He has hugely impressed many with his play, being voted fifth in the 2013 100 Players Who Shook The Kop list and claiming the Standard Chartered Player of the Season award for the 2012-13 season. However his involvement in incidents with Patrice Evra and Branislav Ivanovic, coupled with a very public determination to leave the club in the summer of 2013 have gone some way to damaging his reputation. As such, Suarez remains one of the most controversial figures in Liverpool history. more...
← October 2013December 2013 →
Retrieved from "https://liverpoolfc.fandom.com/wiki/Template:Featured_Article/November2013?oldid=18027"
Community content is available under CC-BY-SA unless otherwise noted.