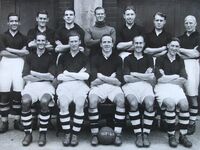 The 1939-40 season was an unofficial season during World War II, and was Liverpool's 48th season of football since they were established. The outbreak of World War II saw the suspension of all professional football in September 1939; Liverpool had played just three games by this point and sat fourth place in the league.

An unofficial regional league system was put in place throughout the country, and Liverpool were placed in the Western Divison, along with Everton and Manchester United among others. Due to many players going off to take part in military service, Liverpool's depleted squad was suplemented by guest players. Notable players to continue playing this season include Arthur Riley, Berry Nieuwenhuys, Billy Liddell and Bob Paisley. (more...)
← April 2013June 2013 →