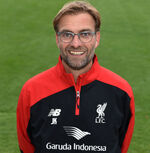 Jürgen Norbert Klopp (born 16 June 1967) is a German football manager who is currently the manager of Liverpool F.C. After leaving Borussia Dortmund in the summer of 2015, Klopp signed with the Reds on 8 October 2015, following the departure of Brendan Rodgers. He took over a Liverpool team that had failed to qualify for the Champions League in the 2014-15 season and were generally considered to be performing below expectations. In his first seven months at the club, Klopp's side produced some fabulous performances, and managed to reach both the League Cup and the Europa League finals, but unfortunately could not win either. (more...)

Retrieved from "https://liverpoolfc.fandom.com/wiki/Template:Featured_Article/July2016?oldid=23368"
Community content is available under CC-BY-SA unless otherwise noted.