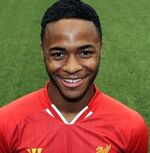 Raheem Shaquille Sterling (born 8 December 1994) is a Jamaican born English footballer currently playing as a forward for Liverpool. A prodigous talent signed for an initial £600,000 from the QPR Academy when still only 15 years old, Sterling made great strides in the Liverpool youth set up before Kenny Dalglish handed him his debut in the 2011-12 season, as the second-youngest debutant in Liverpool's history. Sterling went on to be given a prominent role in the team by Brendan Rodgers in the 2012-13 season and, despite hitting a run of poor form that led some to question whether he would make it as an elite footballer, he kicked on in the latter half of the 2013-14 season with a series of outstanding performances that helped Liverpool achieve a second-placed finish in the Premier League. (more...)

Retrieved from "https://liverpoolfc.fandom.com/wiki/Template:Featured_Article/July2014?oldid=19393"
Community content is available under CC-BY-SA unless otherwise noted.