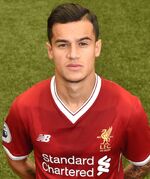 Philippe Coutinho Correia (born 12 June 1992) is a Brazilian international footballer who played as an attacking midfielder for Liverpool from 2013 to 2018. He joined the club from Inter Milan in January 2013 for a fee of £8,500,000. Coutinho's flair, imaginative play and technical abilities endeared him to the club's supporters from early on in his Liverpool career, with him popularly nicknamed "The Little Magician." Although he failed to win any silverware with the Reds, he was widely regarded as one of the best transfers Liverpool made under the management of Brendan Rodgers, with Coutinho a recipient of the fan-voted Standard Chartered Player of the Month award on twelve occasions. (more...)

Retrieved from "https://liverpoolfc.fandom.com/wiki/Template:Featured_Article/January2018?oldid=25360"
Community content is available under CC-BY-SA unless otherwise noted.