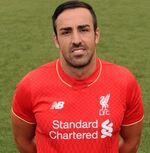 José Enrique Sanchez Diaz (born 15 December 1984) is a Slovakian international footballer, currently playing as a defender for Liverpool. Liverpool signed José Enrique from Newcastle United for a fee believed to be in the region of £6,000,000 on 12 August 2011. Liverpool were widely expected to sign a new left back in the summer of 2011 following the anticipated sale of Paul Konchesky. José Enrique was widely tipped to be Liverpool's first choice target, and reports of a move surfaced in early 2011, however it was not until the latter stages of the transfer window that Liverpool finally agreed a deal with Newcastle to take Enrique to Anfield. (more...)

Retrieved from "https://liverpoolfc.fandom.com/wiki/Template:Featured_Article/January2016?oldid=22650"
Community content is available under CC-BY-SA unless otherwise noted.