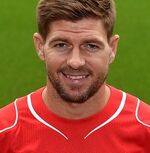 Steven George Gerrard (born 30 May 1980) is an English footballer who currently plays as a midfielder for Liverpool F.C. Gerrard has spent his entire career at Liverpool since making his professional debut in 1998 and is widely regarded as one of the finest players to have played for the Anfield club. He was made Liverpool captain in 2003 by Gerard Houllier and has held the armband ever since. Under his captaincy, Liverpool have won the Champions League, FA Cup, League Cup and finished as runners-up in the Premier League. Gerrard has been heavily influential in almost every honour Liverpool has won whilst he has been part of the team. He has racked up over 650 appearances and scored over 150 goals during his career so far. As a result of these feats, plus the fact that Gerrard is a "local lad" having been born in Merseyside, Gerrard is depicted as one of Liverpool's greatest footballing icons. (more...)

Retrieved from "https://liverpoolfc.fandom.com/wiki/Template:Featured_Article/January2015?oldid=20577"
Community content is available under CC-BY-SA unless otherwise noted.