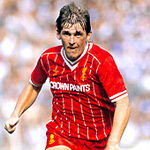 Kenneth Mathieson "Kenny" Dalglish (born 4 March 1951 in Glasgow, Scotland) is a retired Scottish international footballer and former manager of Liverpool. He currently serves as a non-executive board member at the club. Dalglish moved from Celtic to Liverpool in 1977 for a then club record transfer fee and later became player-manager in 1985. During his initial time at Liverpool he won seven league titles, three European cups, and five domestic cups. Because of his prolific career at Liverpool supporters gave him the name King Kenny. He is widely regarded as the greatest footballer in Liverpool's history, as evidenced, for example, by being voted number one in the 100 Players Who Shook The Kop list. He is also highly-regarded at the club for the continued success he brought the club as a manager during the late-1980s and his personal involvement in supporting the club and the affected families through the aftermath of the 1989 Hillsborough disaster. (more...)