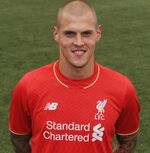 Martin Skrtel (born 15 December 1984) is a Slovakian international footballer, currently playing as a defender for Liverpool. He was signed in January 2008 by then-manager Rafael Benitez for what was at the time a record fee for a defender for the club. He has spent most of his career at Anfield as a first-choice centre back, initially partnering Jamie Carragher and then later Daniel Agger and Mamadou Sakho. In 2012, the Liverpool fans voted Skrtel the Standard Chartered Player of the Season for 2011-12. (more...)