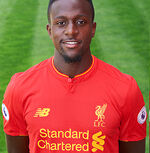 Divock Okoth Origi (born 18 April 1995) is a Belgian international footballer who plays as a striker for Liverpool. In the summer of 2014, Liverpool were continually reported to have interest in Belgium's young star Divock Origi, who attracted international attention for his displays during the 2014 FIFA World Cup. Despite much interest from England and abroad, Liverpool were believed to be Origi's preferred destination. It was later on reported that the Reds had agreed a fee for the striker. On 29 July 2014, it was announced that Origi had signed for Liverpool for a reported fee of £10,000,000. The deal meant that the Belgian was to be sent back out on loan to his former club, Lille, for the 2014-15 season. (more...)