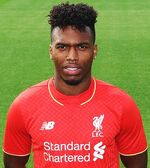 Daniel Andre Sturridge (born 1 September 1989) is an English international footballer who currently plays as a forward for Liverpool. After spending his formative years as a squad player with Manchester City and Chelsea, Liverpool opted to spend £12,000,000 to bring the young striker to Anfield in January 2013 to partner star forward Luis Suarez, following Andy Carroll's failure to live up to expectation. Although the signing was met with some uncertainty, he took Liverpool by storm, netting in each of his first three games at the club and has maintained a strike rate of well over one-in-two during his time there to date. He was the Premier League's second top goalscorer during the 2013-14 season with 21 goals- second only to team mate Suarez- and was named in the PFA Team of the Year as Liverpool narrowly missed out on the Premier League title. (more...)

Retrieved from "https://liverpoolfc.fandom.com/wiki/Template:Featured_Article/August2016?oldid=24824"
Community content is available under CC-BY-SA unless otherwise noted.