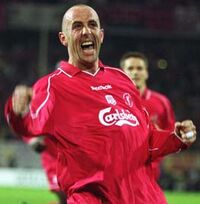 Gary McAllister (born 25 December 1964), nicknamed The Enforcer is a retired Scottish footballer who spent two seasons playing for Liverpool, after joining from Coventry City on a free transfer on 1 July 2000. McAllister left Liverpool to rejoin Coventry on 13 May 2002, having made 87 appearances, scoring 9 goals. Thirteen years later, the Scotsman returned to the club as a first team coach.

The Bosman signing of Gary McAllister by manager Gerard Houllier caught many people off guard as he was 35 years old at the time. Many people questioned what contribution he could make to the team at his age, however in his two years at the club he played a key role as Liverpool won no fewer than five pieces of silverware. (more...)
← July 2015September 2015 →