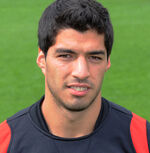 Since the inception of Liverpool F.C., it is thought that 25 players have departed for club-record sums of money. Due to the paucity of reliable financial records from the late 19th and early 20th Centuries, it is not certain who first left the club for a transfer fee and hence who was the first record holder, however the first sale for which reliable data exists is that of George Allan. He left the club for £50 in 1897, though the £1,500 sale of goalkeeper Sam Hardy in 1912 is perhaps the first that can definitively be said to have been a club record sale at the time. Fast-forward to the present day, and the club record sale is now that of Luis Suarez, who commanded a fee one-and-a-half million-times that of Allan in 2014. The list below depicts how Liverpool's record transfer fee received has progressed over time. (more...)

Retrieved from "https://liverpoolfc.fandom.com/wiki/Template:Featured_Article/August2014?oldid=19770"
Community content is available under CC-BY-SA unless otherwise noted.