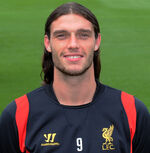 Andrew Thomas "Andy" Carroll (born 6 January 1989) is an English footballer who played as a striker for Liverpool from 2011 until 2013. He currently holds the record as Liverpool's record signing, costing the club £35,000,000, which also makes him the most expensive British footballer in history. Despite the large sum of money invested in Carroll, his Liverpool career proved to be a disappointing one with him only netting 11 goals in 58 games- just six of which came in the Premier League. He sealed a transfer to West Ham in the summer of 2013, with Liverpool accepting a £20,000,000 loss on the player. (more...)
← July 2013September 2013 →

Retrieved from "https://liverpoolfc.fandom.com/wiki/Template:Featured_Article/August2013?oldid=17186"
Community content is available under CC-BY-SA unless otherwise noted.