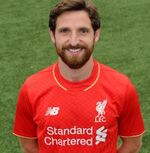 Joseph Michael "Joe" Allen (born 14 March 1990) is a Welsh international footballer who plays as a midfielder for Liverpool. Since Brendan Rodgers took over at the Liverpool helm, there was continuous speculation linking the highly-rated Allen to Liverpool, whom Rodgers had coached during his time as Swansea manager. In July 2012, Swansea confirmed that they had rejected a bid from Liverpool for Allen. Reports emerged that Allen had a £15,000,000 release clause written into his contract, and that this was the figure Swansea were holding out for. (more...)

Retrieved from "https://liverpoolfc.fandom.com/wiki/Template:Featured_Article/April2016?oldid=22945"
Community content is available under CC-BY-SA unless otherwise noted.