Start a Wiki
The 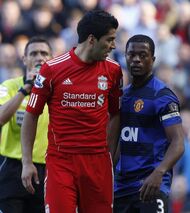 Luis Suarez-Patrice Evra incident refers to a race row that occurred between Liverpool forward Luis Suarez and Manchester United left back Patrice Evra- a Frenchman of African descent- during the 2011-12 season. This incident was the most prominent of a surprising number of incidents involving racial abuse during the 2011-12 Premier League season in England and it received substantial media coverage. Part of the reason for this was the fact that Suarez and Liverpool Football Club staunchly maintained the Uruguayan's innocence- despite Suarez being found guilty, as well as the substantial and continued fallout that followed.

On 15 October 2011, Liverpool hosted Manchester United in a 1-1 draw at Anfield. Suarez had a series of altercations with United left back Patrice Evra throughout the match, including one moment where the pair exchanged words in the box whilst awaiting a corner. Evra complained to the match referee after the game that Suarez had used racist language against him and the case was referred to the FA, who organised for an independent panel to assess the case.

Suarez was handed an eight game ban and a £40,000 fine- pending appeal- on 20 December 2011 for the incident, causing a media frenzy. Liverpool maintained that Suarez was innocent, saying "Nothing we have heard in the course of the hearing has changed our view that Luis Suarez is innocent of the charges brought against him and we will provide Luis with whatever support he now needs to clear his name." It transpired that Suarez admitted using the term Evra had accused him of- later revealed to be the Spanish word "negro", however he argued that in his native Uruguay, the term was not discriminatory, and was in fact an affectionate term. The panel and Patrice Evra accepted that Suarez was not a racist person, however he was punished on a misconduct charge.

Liverpool supporters expressed their fury at the decision, and there was also an outcry from Uruguay. Many supporters accused the FA and the media of a witch hunt. Many others however supported the tough stance taken by the FA on the issue. On 21 December 2011, the Liverpool squad along with manager Kenny Dalglish wore T-shirts bearing Suarez' name and image during the pre-match warm up to a game against Wigan to show their support. This was widely applauded by Liverpool fans, but condemned by most others. The Liverpool playing squad also released a joint statement, detailing their support of Suarez, stating "We totally support Luis and we want the world to know that. We know he is not racist." Suarez' lawyers confirmed he intended to appeal the ban.

However on 3 January 2012, after digesting the 115-page document released by the panel detailing the case and the reasons for the punishment they awarded, Liverpool confirmed that there would be no appeal. The club still felt that the FA made their decision on "unsubstantiated accusations," stating "The FA and the panel chose to consistently and methodically accept and embrace arguments leading to a set of conclusions that found Mr. Suarez to "probably" be guilty while in the same manner deciding to completely dismiss the testimony that countered their overall suppositions." The club were concerned however that continuing to fight the ban might endanger the fight against racism being undertaken by world football, as well as further damage the reputation of the club which had been damaged by the whole affair. "It is time to put the Luis Suarez matter to rest and for all of us, going forward, to work together to stamp out racism in every form both inside and outside the sport. It is for this reason that we will not appeal the eight-game suspension of Luis Suarez."

Suarez' second game back after the ban was an away game at Manchester United on 11 February 2012. Suarez caused controversy from the start by refusing to shake hands with Patrice Evra before kick-off. At half time, Suarez viciously struck the ball at the Manchester United dugout and there was said to be a scuffle between the two sides in the tunnel during the break. At the final whistle, after a 2-1 Man Utd victory, Patrice Evra celebrated with a lap of honour of the pitch, which ended with him celebrating directly in front of Suarez, however Suarez did not react.

Suarez' snub of Evra's handshake was met with widespread condemnation. United manager Alex Ferguson even going as far as to claim "Suarez is a disgrace to Liverpool Football Club. He should not be allowed to play for Liverpool again. He could have caused a riot." When questioned by journalists after the game, Liverpool manager Kenny Dalglish- who claimed to not have seen Suarez snub Evra's handshake, reacted furiously, stating "I think you're bang out of order to blame Luis Suarez for anything that happened here today."

It transpired that Suarez had actually promised Dalglish before the game that he would shake Patrice Evra's hand. As a result, Liverpool managing director Ian Ayre said in a statement "We are extremely disappointed Luis Suarez did not shake hands with Patrice Evra before yesterday's game. The player had told us beforehand that he would, but then chose not to do so. He was wrong to mislead us and wrong not to offer his hand to Patrice Evra. He has not only let himself down, but also Kenny Dalglish, his teammates and the Club. It has been made absolutely clear to Luis Suarez that his behaviour was not acceptable." Liverpool's £20,000,000-a-year shirt sponsor, the Standard Chartered bank also released a statement: "We were very disappointed by Saturday's incident and have discussed our concerns with the club. It was a very robust conversation."

The continuation of the race row and the considerable and increasing damage being done to the reputation of the football club by Suarez' actions led to Liverpool's American owners, the Fenway Sports Group intervening and encourage written apologies from both Suarez and Dalglish. In his apology, Dalglish said "All of us have a responsibility to represent this club in a fit and proper manner. That applies equally to me as Liverpool manager. When I went on TV after yesterday's game I hadn't seen what had happened, but I did not conduct myself in a way befitting of a Liverpool manager during that interview and I'd like to apologise for that." Suarez said "I should have shaken Patrice Evra's hand before the game and I want to apologise for my actions. I would like to put this whole issue behind me and concentrate on playing football."

Retrieved from "https://liverpoolfc.fandom.com/wiki/Luis_Suarez-Patrice_Evra_Incident?oldid=28060"
Community content is available under CC-BY-SA unless otherwise noted.