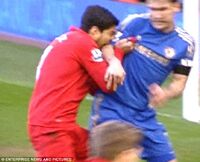 The Luis Suarez-Branislav Ivanovic Incident refers to an incident of violent conduct committed by Liverpool forward Luis Suarez on 21 April 2013 in a Premier League tie at Anfield against Chelsea. During the match, the Liverpool forward bit the arm of Chelsea defender Branislav Ivanovic, which prompted a media and public backlash reaching as far as the Prime Minister against the Uruguayan, and also ignited many debates regarding the disciplinary process of the FA.

On 21 April 2013, Suarez bit the arm of Chelsea defender Branislav Ivanovic whilst Liverpool were hosting Chelsea at Anfield in the Premier League. The incident was missed by the referee, however Ivanovic had gestured to the officials during the match that he had been bitten and TV cameras captured the incident. The reasons for Suarez' actions are unclear, however it appeared to have been an emotional response born out of frustration, especially as Suarez had just conceded a penalty. Suarez stayed on the pitch and went on to net an equaliser for Liverpool in the seventh minute of injury time. Suarez found himself at the centre of a media storm comparable to that regarding the Patrice Evra incidents. There were calls for lengthy bans from the FA to be imposed, and a number of people even called for Liverpool to axe their star striker. Part of the response was attributable to the fact that this was the second time in his career that Suarez had bitten an opponent, having also bitten PSV midfielder Otman Bakkal whilst playing for Ajax. In fact, Suarez was serving his seven match ban for the incident when Liverpool signed him.

Shortly after the match, Suarez took to Twitter and stated: "I'm sad for what happened this afternoon, I apologize Ivanovic and all football world for my inexcusable behaviour. I'm so sorry about it!!" Managing director Ian Ayre cancelled a trip to Australia to deal with the incident, and released a statement saying "His behaviour is not befitting of any player wearing a Liverpool shirt and Luis is aware that he has let himself and everyone associated with the club down. We will deal with the matter internally and await any action from the FA." However, Ayre also clarified that the incident would not cause Liverpool to consider Suarez's future with the club. Manager Brendan Rodgers added: "Having reviewed the video footage and spoken to Luis, his behaviour is unacceptable and I have made him aware of this." Later that day, Suarez took to Twitter again and stated: "I've just spoken to Ivanovic on the phone and I could apologise directly to him. Thanks for accepting."

The following day, Suarez confirmed he had been fined by Liverpool (believed to be two weeks wages, amounting to close to £250,000) and requested the money be donated to the Hillsborough Family Support Group. It was reported that Liverpool also insisted on providing Suarez with psychological therapy to try and curb his behaviour, and a number of individuals, including Jamie Carragher called for the public to tone down their anger against Suarez and instead support the club's efforts to try and help the Uruguayan. The FA formally charged Suarez with violent conduct, but stated the standard three match ban was 'clearly insufficient' for the case. Suarez accepted the charge but denied three matches was an insufficient ban. On 24 April 2013, a three man independent panel chose to impose a 10-match ban on Suarez. The severity of the ban took many by surprise, and while some supported it, many fans and journalists considered it an over-the-top response. Ian Ayre stated "Both the club and player are shocked and disappointed at the severity of today's decision." Many newspapers reported that evening that Suarez had felt 'destroyed' by the punishment, and was seriously considering his future in England, feeling that he had become victimised by the English footballing authorities and his position was untenable.

In a press conference on 25 April 2013, Brendan Rodgers criticised the decision and the FA panel, questioning the true 'independence' of the panel considering they had already been dictated to by the FA that the ban would be greater than three matches. He also cited, as did a number of other individuals, previous disciplinary incidents that failed to attract a comparable ban to Suarez', most notably when Tottenham striker Jermain Defoe bit the arm of West Ham's Javier Mascherano in 2006 and received no ban at all. Indeed Rodgers' sentiments were echoed by a number of other managers, including Sir Alex Ferguson, Roberto Mancini and Alan Pardew. The severity of the punishment prompted calls from various media personnel that the FA need to improve their consistency in their disciplinary actions. However some still lauded the punishment, and deemed it fair, especially considering Suarez' past conduct (see Luis Suarez-Patrice Evra Incident.) One notable supporter of the punishment was Prime Minister David Cameron, who had criticised Suarez as a bad role model for children. Brendan Rodgers criticised Cameron for becoming involved in the affair, however Cameron responded by repeating his opinion.

On 26 April 2013, the panel released their written reasons for the punishment they had handed out, and their document was met with a great deal of confusion by the media. Many had assumed the tough stance taken by the FA was due in part to Suarez' past misdemeanors, however the panel explicitly stated that they were not considering any past incidents involving Suarez in handing out their punishment. Instead, their justification came from comparing the incident to an incident when Brighton's Ashley Barnes tripped a referee and received a six-match suspension, and arguing that Suarez' offence was worse than this. They also cited the fact that the Suarez incident had trended worldwide on Twitter and the fact that Suarez had 'failed to appreciate the gravity of the situation' by denying three matches was an insufficient ban as factors in their decision to ban the Uruguayan for 10 matches.

Suarez chose to accept his 10 match ban and not appeal the decision. In a statement, he stated: "I know that all the things that are happening to me in England will help me to improve my conduct on the field. Right now, I just want to focus on becoming a better footballer on and off field. I would like to explain to everybody that I decided to accept the ban because whilst 10 games is clearly greater than those bans given in past cases where players have actually been seriously injured, I acknowledge that my actions were not acceptable on the football pitch so I do not want to give the wrong impression to people by making an appeal."

Retrieved from "https://liverpoolfc.fandom.com/wiki/Luis_Suarez-Branislav_Ivanovic_Incident?oldid=18204"
Community content is available under CC-BY-SA unless otherwise noted.