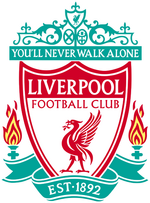 The Liverpool F.C. Reserves is the second string team of Liverpool Football Club. It is currently managed by Spanish youth coach Rodolfo Borrell and, as of the 2012-13 season, competes as the Liverpool F.C. Under 21s in a national Under 21 League.

Community content is available under CC-BY-SA unless otherwise noted.