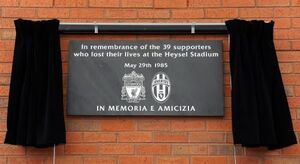 The Heysel Stadium disaster was a human disaster that occurred on 29 May 1985 at the Heysel Stadium, Brussels prior to the 1985 European Cup final between Liverpool and Juventus. 39 people, mostly fans of Juventus, lost their lives during the incident with a further 600 injured, which has had a substantial impact on European football.

The Heysel Stadium was a controversial selection for host of the European Cup final. The stadium was, at the time, 55 years old and in need of redevelopment. Much of the stadium's structures were weak, fans without tickets could even be seen kicking holes in the cinderblock walls to gain access to matches. Arsenal had played in the stadium in the year prior to the 1985 European Cup final and had slated the stadium as inadequate. Both Juventus and Liverpool had requested UEFA to alter the host for the final, however UEFA declined their requests.

The small contingent of police positioned along the thin fence failed to adequately control the situation and the Liverpool fans began to charge the Juventus fans in terrace Z, breaking through the fence and overpowering the police. The Juventus fans began to flee, however their way was blocked by a concrete wall at the other side of the terrace. The panic-stricken Juventus fans began to pile up against the wall, which eventually collapsed, causing many fans to become crushed. It is then that the majority of the deaths and injuries occurred. Sections of iron fencing were used to carry bodies, which were piled along the side of the pitch and covered in giant football flags ready to be taken away by incoming police and medical helicopters. The Juventus fans at the opposite side of the stadium, witnessing the tragedy, began to riot and headed down the stadium to confront the Liverpool fans. They were however engaged by the police and a struggle ensued. It was decided that the final would go ahead, as it was feared that cancelling the match could provoke further violence. Pleas were made for calm in Italian and English. Liverpool manager Joe Fagan addressed the Liverpool supporters, stating "This is a football match. It is my last game as manager and you are spoiling it. Get back and be sensible.”

The Liverpool team were aware of the disaster occurring within the stadium whilst waiting in the dressing room for a decision regarding the match to be made. Liverpool player Alan Kennedy, who was injured for the final, said “The last thing in the world most of the players wanted to do at that time was play a game of football. I was distraught; I was watching people dying and others being brought out screaming and covered in blood. I remember Bruce Grobbelaar saying to me after, ‘If football is really going to be a matter of life and death then I don’t want to be part of it.’” The game eventually kicked-off at 21:42, whilst police were still fighting rioting Juventus fans. Juventus won the match 1-0 via a Michel Platini penalty. Liverpool player John Wark recalls "Juventus won after Michel Platini scored from the penalty spot. It wasn’t a penalty but there were no complaints from Liverpool players because we just wanted to go home.”

Following the disaster, an initial report placed the blame entirely at the feet of the Liverpool fans. UEFA observer Gunter Schneider had concluded "Only the English fans were responsible. Of that there is no doubt." However, no official inquiry into the incident was ever undertaken. UEFA banned all English clubs from European competition for 5 years, with Liverpool specifically given a 10 year ban, however Liverpool only saw through 6 of those 10 years, making their European comeback in the 1991-92 season. It has been suggested that Liverpool could have won more European Cup titles had they not been given this ban, as their squad in the latter half of the 1980s under manager Kenny Dalglish was very highly regarded. In addition to the bans on English clubs, Belgium was banned for 10 years from hosting a major European final.

Heysel Stadium never hosted a football match again in its older state. In 1994, it underwent an extensive regeneration and became known as the King Baudouin Stadium, which has since been selected by UEFA for a major European Cup final, the 1996 European Cup Winners Cup.