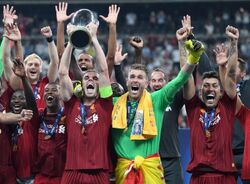 Liverpool won the 2019 UEFA Super Cup on 14 August 2019 with a penalty shootout victory over Chelsea after a 2-2 draw in extra-time. Liverpool qualified for the Super Cup as the 2019 Champions League winners, while Chelsea triumphed in the Europa League. It was the first all-English tie in the competition. Liverpool were victorious for a fourth time, with only AC Milan and Barcelona the only sides to have more success.