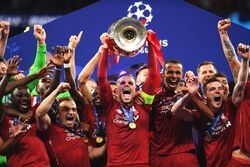 Liverpool won the 2019 UEFA Champions League Final, played at the Wanda Metropolitano, Madrid, beating Tottenham Hotspur 2-0. The Reds took an early lead, and spent the majority of the match defending it, before finally sealing victory late on. The win was made all the more sweeter due to their defeat to Real Madrid in the previous final.

Liverpool’s campaign began in the group-stage, with qualifiers no longer required for Premier League sides. Their opponents were Paris Saint Germain, Napoli, and Red Star Belgrade, with the group seen as one of the toughest in the competition. The Reds progressed by the skin of their teeth, requiring a 1-0 victory over Napoli at Anfield to prevail over the Italian side on ‘goals scored’.

They were drawn to European giants, Bayern Munich, in a highly anticipated tie. Following a 0-0 draw at home, Liverpool travelled to Germany, and returned with a convincing 3-1 victory to send them through. Porto were then the opposition in the quarter-finals, with the sides having met in the previous victory, with Liverpool emerging 5-0 winners. The Reds progressed with similar ease, a 6-1 aggregate victory to reach the semi-finals.

In the semis, the opponents were Barcelona. After the first leg, many judged the tie to be over, with the Catalans bringing a 3-0 lead to Anfield. Liverpool however, had other ideas. One of the club’s greatest European nights followed, smashing Barcelona 4-0 to reach a second consecutive European Cup final.

The result was an all-English tie, with Tottenham Hotspur reaching their first final. Liverpool were seen to be clear favourites, having finished 26 points clear of the London side in the Premier League, as well as beating them home and away during the campaign.