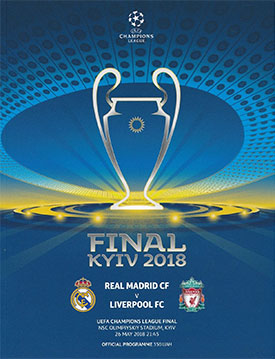 Liverpool reached the 2018 Champions League Final where they played Real Madrid, in a repeat of the 1981 final. Madrid won their third title in succession, prevailing 3-1. After a goalless first half, errors from Loris Karius either side of a spectacular Gareth Bale effort cancelled out Sadio Mane’s equaliser.

Liverpool started off the match on the front foot, earning some early set pieces, and testing Keylor Navas with a powerful strike from Alexander-Arnold, with Madrid very tentative going forward due to fear of the Reds’ attacking threat. After 25 minutes however, Mohamed Salah was involved in an entanglement with Sergio Ramos, with the Madrid captain dragging Salah down, and landing on the Egyptian’s shoulder, forcing an early substitution. Madrid also lost Dani Carvajal a few minutes later, due to a challenge from Andy Robertson. The half tailed off to a goalless end, with both sides struggling to get back into the flow of the game.

The second half began with a lot of pressure from Real Madrid, with Isco striking the bar early on. Ramos was once again involved in a strong challenge, colliding with Loris Karius on a set piece. Minutes later, Karius made a catastrophic error, throwing the ball straight to Benzema, who deflected the ball into the open net. Liverpool responded well, and equalised through Sadio Mane just five minutes later, after a towering headed from Dejan Lovren. They were pegged back again however, after a magnificent overhead kick from Gareth Bale regained the Madrid lead just after the hour mark. Mane later hit the post, but Liverpool failed to threaten after that, and a long range Bale effort was fumbled into the net by Karius, to give Real Madrid a 3-1 victory.

Nine of the eighteen-man squad were previously involved in the 2016 Europa League Final, while Jordan Henderson was the only member to have previously won a trophy with the club.

Retrieved from "https://liverpoolfc.fandom.com/wiki/2018_Champions_League_Final?oldid=27236"
Community content is available under CC-BY-SA unless otherwise noted.