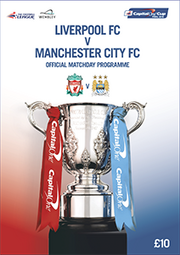 Liverpool lost the 2016 League Cup Final, falling to a penalty shootout defeat to Manchester City on 28 February 2016 at the Wembley Stadium, after a 1-1 draw in 120 minutes. It was the Reds' first final under Jurgen Klopp, and was their first final appearance since 2012.

Liverpool started their campaign off at home to Carlisle United, but were taken all the way to penalties by the League 2 side, drawing 1-1 thanks to Danny Ings' opener, and beat them 3-2 in the shootout. Next, the Reds were at Anfield again, but this time with Jurgen Klopp at the helm, with Brendan Rodgers having been sacked earlier in the month. Klopp's side beat Bournemouth 1-0, with Nathaniel Clyne netting the winner. The quarter-finals saw Liverpool travel to Southampton, and the Reds went behind with in the first minute. They came back however, in spectacular style, prevailing 6-1 at the Saint Marys, with Divock Origi netting his first three goals for the club. They were drawn against Stoke City for the semi-finals, and started the tie off very well, with Jordon Ibe giving the Reds a 1-0 win at the Britannia. However, Stoke won the second leg 1-0 at Anfield, forcing a penalty shootout, in which Liverpool prevailed, beat them 6-5.

Liverpool started off the brightest, with Alberto Moreno being denied by the goalkeeper after just 30 seconds. As the half went on however, City started to dominate and came closest to scoring, with Sergio Aguero's close range effort being tipped onto the post very well by Simon Mignolet.

The second half started off in the same fashion, but this time the Mancuncians really punished Liverpool, with Fernandinho opening the scoring after 49 minutes. The goal was really down to a huge error by Mignolet, who almost seemed the let the ball through him from a tight angle. City remained on top and should have earned a penalty, with Moreno bringing down Aguero, but the referee saw nothing wrong. Moreno was then taken off, replaced by Adam Lallana, and Divock Origi soon followed the Englishman. Liverpool began to probe for an equaliser, and finally found it after 83 minutes. Daniel Sturridge's low cross was met by Lallana, but hit the post, before falling to Philippe Coutinho, who calmly placed it in, sparking jubilant celebrations from the Liverpool fans. It was not secure yet however, and City produced a tonne of close chances, with Mignolet pulling off an exceptional save to deny them a winner.

Extra time started off in Liverpool's favour, and Origi came very close to giving the Reds the lead, but Caballero denied him very well. City then began to grow back into it, and Mignolet was once again forced into a top save, denying Aguero one on one for the second time in the match. Both sides created more chances, but neither came again close to a winner, forcing extra time.

Manchester City won the coin toss and so the shootout was played in front of their supporters. Emre Can was first up, but cleverly executed a 'paneka', chipping it down the middle to the goalkeepers expense. Fernandinho took first for City, but his effort hit the post, giving Liverpool the advantage. Lucas struck next for Liverpool, but failed to capitalise, with Caballero denying him well. Jesus Navas came up next for the Blues, and Mignolet could only get a hand to it, levelling the shootout. Liverpool goalscorer Coutinho came up next, but took his penalty awfully, forcing an easy save for the goalkeeper. Sergio Aguero then gave City the advantage, with a perfectly placed penalty. Adam Lallana came up next for the Reds, and had to score or it would be match point City. Lallana placed it well, but was spectacularly denied by Caballero, leaving Liverpool all but out. Yaya Toure, stepped up in front of his brother, Kolo, and converted well, handing the 2016 League Cup to Manchester City.