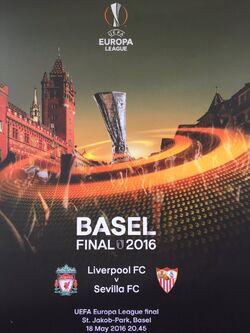 Liverpool reached the 2016 Europa League Final where they played Sevilla, who had won the competition for the past two years, and the most times overall. Hosted at St. Jackob-Park, Basel, Sevilla won the competition for the fifth time, beating the Reds 3-1. Liverpool opened the scoring in the 35th minute, but the Spanish side netted thrice in the second half to win the final. This was the Reds' second final defeat of the season, following the League Cup Final.

For the first half, Liverpool largely dominated, having the most shots and the most possession. It took however, until the 35th minute for the first goal to be scored, with Daniel Sturridge firing the Reds in front with a spectacular effort with the outside of his boot. Almost immediately after, Dejan Lovren seemed to have doubled their lead, but it was disallowed for offside.

Immediately at the start of the second half, Sevilla equalised through Kevin Gameiro, who tapped in after Alberto Moreno was easily beaten by Sevilla's winger. After this the Spaniards controlled the game, with a shaken Liverpool failing to create any chances, before Coke gave Sevilla the lead around the hour mark with a curling effort from outside the box. Divock Origi was introduced for the Reds but Coke added a third for Sevilla almost directly after, resulting in Sevilla winning the 2016 Europa League.