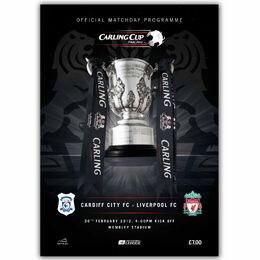 Liverpool bossed possession for the majority of the game and laid seige to the Cardiff goal with a total of 39 shots, however Cardiff produced a staunch defensive display and threatened the Liverpool goal themselves on several occasions. Cardiff took the lead through a well-worked goal in the first half, but Liverpool equalised on the hour mark when Martin Skrtel stabbed home from a corner. Dirk Kuyt then appeared to have won the tie for the Reds in the 18th minute of extra time, but two minutes from the final whistle Cardiff equalised from a corner. In the penalty shootout, Liverpool prevailed 3-2, despite seeing Steven Gerrard and Charlie Adam miss the Reds' first two spot kicks.

Liverpool had been enduring an indifferent season in the League, however their form in the League Cup was in contrast far more efficient. They had an unprecedented run of away games, being drawn away in every round. In Round 2, Liverpool faced League Two Exeter City and manager Kenny Dalglish surprised many by fielding a strong line-up including the likes of Luis Suarez, Stewart Downing and Raul Meireles. The Reds went on to knock out Brighton, Stoke and Chelsea before setting up a two-legged semi-final clash with high-flying Manchester City. Liverpool won the first leg at the Etihad Stadium 1-0 thanks to a Steven Gerrard penalty and a highly defense-minded approach. The return leg at Anfield finished 2-2, with goals coming from Gerrard- again from the spot, and Craig Bellamy.

Both sides began the game brightly, with Liverpool going close to opening the scoring within the first two minutes. Glen Johnson received the ball just outside the penalty area and took an impressive curling shot at goal which struck the bar. Steven Gerrard came in for the follow-up but blazed over. Cardiff however were the side to take the lead, and they did so against the run of play. On 18 minutes, full back Kevin McNaughton whipped in a cross from the right which Martin Skrtel headed straight back to him. McNaughton then played the ball into the box, which was moved on to Joe Mason who had snook in behind Jose Enrique to slot under the legs of Pepe Reina. Liverpool immediately tried to restore parity, but they saw a number of shots go wide of the target, including a number of headers from Andy Carroll. Liverpool's attackers were also being frustrated by sterling defensive displays by Cardiff centre halves Mark Hudson and Ben Turner, who made a succession of impressive last-ditch tackles in the box. Stewart Downing was proving Liverpool's most effective attacking outlet in the first half, as he got the better of McNaughton many times to drill balls into the box. One cross of note floated across the face of goal in front of Jordan Henderson who had an excellent opportunity to volley at goal, however he completely miscued his shot and failed to make contact with the ball. The first half drew to a close with Cardiff's defense effectively keeping Liverpool at bay.

The second half began with Liverpool in the ascendancy, and Luis Suarez in particular becoming more lively. However with Liverpool still struggling to break through Cardiff's rearguard, Kenny Dalglish introduced Craig Bellamy for the disappointing Henderson on the hour mark. A minute later, Liverpool equalised- although the goal had nothing to do with Bellamy. A corner was whipped in by Downing and was met by Andy Carroll. His header was in turn headed on by Suarez which struck the post before falling to the feet of Martin Skrtel. He took one touch before stabbing the ball into the back of the net. Liverpool gained confidence from the goal and forced a succession of corners, with Skrtel meeting one with a vicious volley that the impressive Cardiff goalkeeper Tom Heaton did well to save. However as Liverpool failed to get the second goal, Cardiff settled and the game became more open. In the last few minutes, Cardiff striker Kenny Miller was put through on goal but blasted over to let Liverpool off and send the game into extra time- but not before a rib injury to Daniel Agger prompted the introduction of Jamie Carragher.

Early in extra time, Liverpool won a corner which was met by the head of Andy Carroll. His header was not far from giving Liverpool the lead, however he was replaced straight after by Dirk Kuyt. With the players- Cardiff's in particular- tiring and suffering from cramp, the Dutchman's running caused the Bluebirds defenders problems. Three minutes into the second half of extra time, Kuyt took a cross-shot towards Suarez from the edge of the box which was rebounded back to Kuyt. He then took a snap-shot that nestled in the bottom corner. Cardiff however suddenly regained some energy and put Liverpool under heavy pressure from then on. Two minutes from time, their pressure paid off when a second consecutive corner fell to the feet of Ben Turner to stab home under Reina, sending the game to penalties.

Liverpool won the coin toss and so the shootout was played in front of the Liverpool supporters. Steven Gerrard was first up, however his penalty was met with an outstanding save from Tom Heaton. Kenny Miller then took Cardiff's penalty and although he sent Reina the wrong way, his shot went just too wide and cannoned off the post. Charlie Adam took Liverpool's second penalty, however he blasted his shot well over. A penalty was finally converted when Cardiff's Don Cowie confidently planted a shot in the back of the net, before Dirk Kuyt drew Liverpool level with a rasping low drive. Cardiff striker Rudy Gestede then took Cardiff's third, however his weak effort hit the post, leaving the score at 1-1 after three penalties each. Stewart Downing then scored Liverpool's next penalty with a similar effort to Kuyt's before Peter Whittingham restored parity for Cardiff. Glen Johnson was Liverpool's last penalty taker, and he buried his shot high into the net with an impressive spot kick. Cardiff's last penalty was taken by Anthony Gerrard- cousin to Steven who had been brought on for Mark Hudson in extra time after the Cardiff skipper suffered cramp. He dragged his penalty just wide, handing Liverpool the trophy. 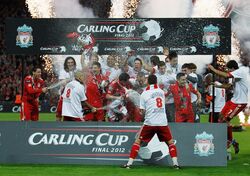 For an impressive attacking display, Stewart Downing was named the official man of the match, although some publications gave the nod to Martin Skrtel and Cardiff 'keeper Tom Heaton. The victory was celebrated jubilantly by Liverpool, however Kenny Dalglish stressed that the club was "not finished yet" in the season. The club's owners were full of praise for the win. Chairman Tom Werner said the triumph ranked "at the very top" for him in his long career in the sports business, whilst John Henry remarked that Dalglish's achievements in his second managerial spell at Liverpool were "extraordinary."

There was also a lot of praise for the performance of Championship side Cardiff City, and also sympathy for Anthony Gerrard for missing the crucial spot kick. Steven Gerrard claimed that he had "mixed emotions" after the win having watched his cousin miss.

Retrieved from "https://liverpoolfc.fandom.com/wiki/2012_League_Cup_Final?oldid=22800"
Community content is available under CC-BY-SA unless otherwise noted.