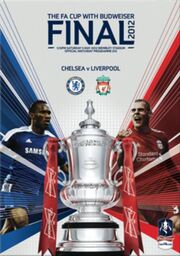 Liverpool lost the 2012 FA Cup Final, falling to a 2-1 defeat to Chelsea on 5 May 2012 at Wembley Stadium. It was the first time Liverpool had contested the FA Cup since their triumph in 2006, and followed their success in the 2012 League Cup Final as Liverpool sought to ease the disappointment of their underwhelming League campaign by claiming the domestic cup double. The game marked another chapter in the rivalry between Liverpool and Chelsea that has developed since the early-mid 2000s. Liverpool headed into the game having beaten Chelsea in each of their past four meetings, and with Kenny Dalglish having never lost to the side in all his time as manager.

For the first 60 minutes of the match, Liverpool did not have the necessary drive to trouble their opponents, and were well controlled by Chelsea. A series of errors let Ramires in to fire Chelsea into the lead with 11 minutes gone and, after Liverpool had failed to get back into the match, Didier Drogba doubled their lead shortly after half time with a neat finish between the legs of Martin Skrtel. Dalglish brought on Andy Carroll in response, who quickly pulled a goal back with a fierce shot in the box after some good footwork. Carroll put in an excellent shift that lifted his teammates, who dominated the final 30 minutes. Carroll thought he equalised with 10 minutes remaining when his header was clawed out of the goal by Chelsea 'keeper Petr Cech, but the linesman ruled the ball had not crossed the line. Chelsea saw out the rest of the match to deny Liverpool their cup double.

In stark contrast to their run in the League Cup, Liverpool's run to the FA Cup Final included an unprecedented succession of home games. They hammered their 3rd round opponents, League 1 side Oldham 5-1 before edging past Manchester United 2-1 in the 4th round. They were rewarded with a home tie against Championship side Brighton in round 5, who they demolished 6-1- though three of Liverpool's goals were Brighton own goals. They then recorded a solid 2-1 victory over Stoke in the quarter finals, before putting out Merseyside rivals Everton in the semis- prevailing 2-1 at Wembley. In this match, Liverpool started poorly and trailed 1-0 at half time before turning the game around with a rousing second half performance- in some ways, this mirrored the events at the team's other Wembley appearances that season, in the League and FA Cup finals. It was noteworthy that Liverpool had conceded one goal in all of their FA Cup fixtures in the run up to the final.

Prior to the match, the prevailing opinion was that Liverpool needed to win the FA Cup to be able to claim their season as a successful one, due to the poor League campaign. A number of people also believed Kenny Dalglish's job as manager depended on the outcome of the match.

The match began rather tentatively, with the bulk of the the first 10 minutes seeing each side stroke the ball around with little urgency. The only moment of note in the opening exchanges was a speculative volley from Chelsea forward Didier Drogba that sailed over the bar. That changed on 11 minutes when Jay Spearing lost the ball in the middle of the pitch to Chelsea forward Juan Mata. Mata burst forward and slipped the ball to Ramires on the right flank, who shrugged off the attentions of Jose Enrique and impressively outdid the Spaniard for pace to put himself one-on-one with Pepe Reina. Ramires shot at Reina's near post, which Reina should have had covered, but he had guessed that Ramires was going to shoot across goal and had already made the dive to his right when Ramires' shot crept in past Reina's outstretched arm.

Liverpool responded well initially, driving forward but struggling to get lone forward Luis Suarez into the game. Liverpool's best chance in the first half fell to Craig Bellamy after good work by Glen Johnson on the right to get past left back Ashley Cole and deliver an excellent cross, which fell to Bellamy in the middle of the box. His first time shot beat Petr Cech, but was cleared by Branislav Ivanovic. However, this attempt aside, Chelsea saw out the first half with ease and Liverpool failed to gain much of a foothold in the tie. Arguably it was only the assured performances of Martin Skrtel and Daniel Agger that prevented Chelsea from testing Reina more than they did.

The second half began much as the first half had ended. Liverpool still failed to put Chelsea's defence under much pressure with Chelsea able to dictate the flow of the game. Chelsea's second came after 52 minutes; on the left flank, Frank Lampard was able to easily get past Jay Spearing and played a through-ball for Drogba in the Liverpool box, who placed his shot through Martin Skrtel's legs and into the far corner of the the Liverpool goal. Kenny Dalglish responded swiftly by taking off the disappointing Spearing and introducing Andy Carroll. Carroll, who had scored the goal that sealed Liverpool's place in the final, made an immediate impact. Stewart Downing blocked an attempted clearance by Jose Bosingwa and the ball fell to Carroll in the box. After some neat footwork that turned Chelsea captain John Terry, Carroll rifled his shot into the roof of the net to pull the score back to 2-1. This sparked Liverpool into life, who proceeded to attack with real purpose. Carroll himself was doing a lot to drive the team, notably even racing back to the halfway line at one point to win the ball back from midfield with an excellent sliding tackle to intiate another Liverpool attack. As the clock wound down, Glen Johnson, Jordan Henderson and Luis Suarez all took shots at goal and Kenny Dalglish brought Dirk Kuyt on for Bellamy.

On 82 minutes, Liverpool thought they'd equalised when Luis Suarez' expertly chipped ball from the edge of the box was met by the head of Carroll. The ball was directed goalwards, however an excellent reflex save from Petr Cech pushed the ball on the underside of the bar and out. The Liverpool players initially celebrated, thinking the ball had crossed the line however the linesman ruled that it hadn't. Replays proved inconclusive but suggested that only part of the ball had crossed the line, validating the decision of the referees. Regardless, the Liverpool players were incensed, and Luis Suarez was cautioned for dissent. Liverpool won a succession of corners in the dying moments, from which Martin Skrtel and Andy Carroll both had shots blocked. However as the game went into injury time, Chelsea were able to keep hold of the ball and see the game out, sealing themselves the Cup at the expense of Liverpool. Liverpool's strong finish to the game however had uplifted the fans, who could be heard vociferously singing You'll Never Walk Alone right up to the final whistle.

Kenny Dalglish, upon reflection, suggested the result was a fair one considering Chelsea had dominated for 60 minutes, whereas his side had only managed to do so for 30: "We were excellent for the last half hour but the game lasts for 90 minutes... If you're playing against the quality of Chelsea, you cannot give them a two-goal start and expect to give yourself an opportunity to get something from the game... If you're the better team for an hour, you're going to be disappointed if you don't get a positive result."

He also suggested that the big-game experience of the Chelsea squad, compared to the relative inexperience of his squad played a role in the performance of the two sides: "Maybe they were just a wee bit nervous – a lot of them are just youngsters, or relatively young and inexperienced at this level. Chelsea are thoroughbreds, they've been through the course before."

Andy Carroll was roundly applauded for his passionate, all-action performance and was unanimously selected as Liverpool's man of the match by fans and journalists.