The 2010-11 Liverpool Academy Under-18s season was a notable season for the young Reds. Although they failed to win either the Premier Academy League or the FA Youth Cup, they did finish runner up in the league to cross-city rivals Everton by a single point, and scored an impressive 18 more goals than the Blues. A number of young starlets garnered attention for their exploits this season, including Adam Morgan, for netting 21 goals in 20 appearances, and Raheem Sterling for his five goal haul in the Youth Cup against Southend. A number of the youth players also made an impression for the reserves during the season.

Team photo taken in May 2011 as the youth team travelled to the Caribbean to take on the St. Vincent & Grenadines Under 20s. 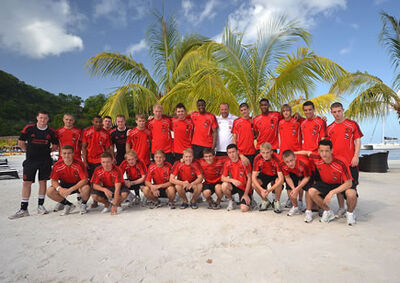 Retrieved from "https://liverpoolfc.fandom.com/wiki/2010-11_Academy_Under_18s_season?oldid=16622"
Community content is available under CC-BY-SA unless otherwise noted.