The 2009-10 Academy Under 18s season was the first season in which the Liverpool under 18s were coached by Rodolfo Borrell, a renowned youth coach brought in from Barcelona by Rafael Benitez in an effort to improve the Academy. The season was not very successful, with the team finishing 4th out of 10 sides in the Premier Academy League C and only reaching the fifth round of the FA Youth Cup. However, a number of the youth players have gone on to make an impression at a higher level in the club in subsequent years, most notably Jon Flanagan, Jack Robinson and Conor Coady. 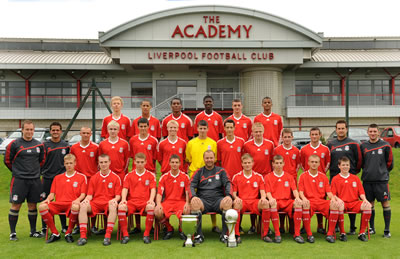 Retrieved from "https://liverpoolfc.fandom.com/wiki/2009-10_Academy_Under_18s_season?oldid=16621"
Community content is available under CC-BY-SA unless otherwise noted.