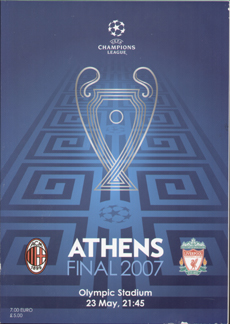 Liverpool reached the 2007 Champions League Final where they played AC Milan, in a repeat of the 2005 final. Hosted at the Olympic Stadium, Athens, AC Milan gained revenge for their 2005 defeat by prevailing 2-1. Liverpool found themselves 2-0 down by the 82nd minute, but found hope through a late goal from Dirk Kuyt. They were unable to push for an equaliser though and the match finished in the favour of Milan.

The first half saw both sides have numerous attempts to take the lead, however it was Milan who finally broke the deadlock on the stroke of half time. Xabi Alonso fouled Kaka and Andrea Pirlo took a shot at goal. The shot deflected off of Filippo Inzaghi, wrong-footing 'keeper Pepe Reina and putting Milan 1-0 up. Replay footage however showed that the ball struck Inzaghi on the arm, which was missed by the match officials. Milan's first goal shared similarities with their first goal from the 2005 final. In both finals, Milan took the lead via an Andrea Pirlo free kick that was awarded for a foul on playmaker Kaka.

In the second half, Liverpool had some chances to draw level however in the 82nd minute, after Liverpool replaced the defensive Javier Mascherano for striker Peter Crouch, Kaka was afforded the space to bear down on the Liverpool goal. He put Inzaghi through on goal who slotted past Reina to put Milan 2-0 up and on their way to the championship. Dirk Kuyt pulled a goal back in the 89th minute with a header from a corner, however replays suggested Kuyt was in an offside position when he scored. Milan however saw the game through and held on to win 2-1.

Despite suffering defeat, Liverpool had a total of 12 shots with 4 on target during the game, compared with Milan's 5 shots with 3 on target.

Liverpool played 6 players who also took part in the 2005 final: Finnan, Carragher, Riise, Alonso, Gerrard and Kewell, who was a 59th minute substitute for Boudewijn Zenden.

Retrieved from "https://liverpoolfc.fandom.com/wiki/2007_Champions_League_Final?oldid=16674"
Community content is available under CC-BY-SA unless otherwise noted.