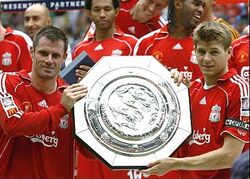 The 2006 Community Shield was the last trophy won by manager Rafael Benitez during his tenure at Anfield.