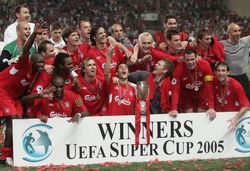 Liverpool won the 2005 UEFA Super Cup on 26 August 2005 with a 3-1 extra-time victory over Russian side CSKA Moscow at the Stade Louis II stadium in Monaco. Liverpool qualified for the Super Cup as the 2005 Champions League winners, whereas CSKA Moscow did so as winners of the 2005 UEFA Cup. It was the third time Liverpool had lifted the cup, and the Reds' second consecutive Super Cup win following their victory in 2001 over Bayern Munich. The match is memorable for the late man-of-the-match cameo from substitute Djibril Cisse, whose goals saw Liverpool mount a spirited comeback to win the match after extra time, having spent the majority of the contest 1-0 down.

With Liverpool's new striker Peter Crouch unavailable due to injury, there was much speculation who manager Rafael Benitez would select to lead his attacking line for the match. Both Djibril Cisse and Fernando Morientes were struggling to see their careers at Anfield take off, however Benitez decided against starting the Frenchman and opted for Morientes supported by second-striker Luis Garcia. The Reds were also without captain Steven Gerrard and left back Djimi Traore due to injury, causing Benitez to bring John Arne Riise down from his more usual wing role to left back, and he also pushed right back Steve Finnan into midfield to play alongside Xabi Alonso, Dietmar Hamann and new signing, Boudewijn Zenden. Josemi took Finnan's place in the back four alongside the club's ethereal centre half partnership of Jamie Carragher- captain for the evening in Steven Gerrard's absence- and Sami Hyypia. Liverpool's new goalkeeper Pepe Reina also started the match.

CSKA Moscow got the game underway. Liverpool began brightly and within two minutes, Hamann had forced a save with a shot from outside the box. Moscow keeper Igor Akinfeev had to be alert again on ten minutes to smother the ball at the feet of Luis Garcia as Liverpool pressed for an opener. On twelve minutes, Liverpool broke with a counter attack and Garcia was put through on goal by Bolo Zenden, however he fired his shot over the bar. Liverpool continued to dominate possession, however they began to struggle to work the Moscow goalkeeper with only speculative efforts from Morientes and Garcia to speak of.

Liverpool paid for their profligacy twenty eight minutes into the game when Moscow forward Daniel Carvalho opened the scoring with Moscow's first real attack of the game. Moscow broke forward and stretched open the Reds' back line. Carvalho took the ball around Reina and slotted home into an empty net from a tight angle. The goal failed to alter proceedings much with Liverpool continuing to dominate possession without testing Akinfeev. Zenden picked up a booking on thirty eight minutes for a poor challenge on Moscow left back Chidi Odiah as the match petered out to half time.

Liverpool got the second half underway and within five minutes, Josemi was booked for a challenge on winger Milos Krasic. Liverpool continued to be wasteful in front of goal, with Josemi shooting over from the edge of the box. Rafa Benitez responded by bringing on Florent Sinama-Pongolle for Steve Finnan on 55 minutes. This switched Liverpool to a more standard 4-4-2 formation with Garcia dropping out to the right flank. Still Liverpool lacked a cutting edge in the final third, and they were almost punished again when a mix up between Pepe Reina and Sami Hyypia almost let Moscow in to score a second- however Hyypia atoned with a vital clearance. Benitez brought on new signing Momo Sissoko in place of Xabi Alonso for the final twenty minutes.

Finally, with eleven minutes to go, Djibril Cisse was brought on for Riise and within three minutes he scored the equaliser. Pepe Reina caught a CSKA corner and sent a long ball up field. Garcia chested it down and fed the ball through for Cisse. Moscow defender Sergei Ignashevich beat Cisse to the ball, however his clearance ricocheted off the striker and into the empty net- vacated by Akinfeev who had raced off his line to try and clear the ball. The equaliser sent the game into extra time, in which the Reds were well on top.

Five minutes into extra time, Sinama-Pongolle picked up a booking for pulling back Moscow midfielder Dudu. With two minutes of the first half of extra time to go, Liverpool took the lead- again through Djibril Cisse. Dietmar Hamann brought the ball out of defence and found the run of Cisse. He picked him out with a long ball over the top into the CSKA defence. Ignashevich misjudged the flight of the ball, allowing Cisse to break through and take a shot at goal- his first shot was parried by Akinfeev, however Cisse scored from the rebound. In the second half, CSKA striker Vagner Love test Reina however his shot was easily saved. Liverpool put the game to bed four minutes in when Hamann again found Cisse breaking forward at pace. Cisse collected the ball on the right flank and placed a perfect cross for Luis Garcia to head home Liverpool's third. The match finished 3-1, and Jamie Carragher went up to lift trophy. 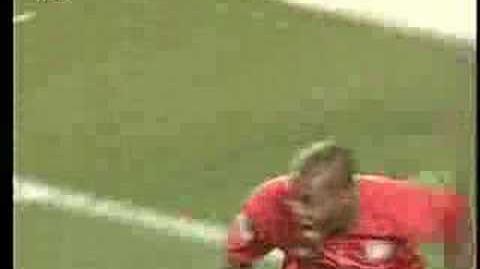