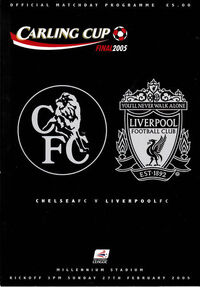 Liverpool lost the 2005 FA Cup Final, falling to a 3-2 defeat against Chelsea on 27 February 2005 in Cardiff. The match was Liverpool's 10th League Cup Final, of which this was their third defeat. It was also the first cup final of manager Rafael Benitez's Anfield tenure- as well as of his counterpart Jose Mourinho's career at Chelsea. The game can be seen as the start of an intense rivalry that developed between the two sides during Benitez's time in charge of Liverpool. The match began in excellent fashion for the Reds with John Arne Riise crashing a volley into the Chelsea net within the first minute. However Chelsea exerted growing pressure as the game progressed and grabbed an equaliser thanks to a Steven Gerrard own goal. Extra time brought two more Chelsea goals before Antonio Nunez pulled one back to set up a grandstand finish.

Liverpool's road to the final began on 26 October 2004, with a 3-0 victory over Millwall- the match featuring a rare goal from Salif Diao. Neil Mellor hit a brace against Middlesbrough in the next round on 1 November 2004 to seal a 2-0 victory for the Reds, before Liverpool won a penalty shootout with Tottenham Hotspur in the quarter finals on 1 December 2004, following a 1-1 tie. Liverpool had fallen behind to a Jermain Defoe goal in the 108th minute, before a 117th minute Florent Sinama-Pongolle penalty sent the match to the shootout- Liverpool prevailing 4-3. The semi-finals paired Liverpool with Watford- Steven Gerrard netted the only goal in each leg as Liverpool progressed 2-0 on aggregate.

In just the first minute of the match, Liverpool opened the scoring after John Arne Riise connected with Fernando Morientes' cross to hammer a left-footed volley past Petr Cech from inside the box. The goal was the quickest-ever in a League Cup final. Although the Liverpool faithful greeted the goal with huge delight, it appeared to encourage the players to sit deep in an attempt to preserve the early lead they had given themselves. As such, Chelsea began to dominate possession and much of Liverpool's play centred around hacking the ball out of defence.

Sami Hyypia earned himself an early yellow card after going through the back of Didier Drogba, who was later followed into the book by Frank Lampard for a tackle on Luis Garcia. Djimi Traore also saw yellow in the first half. Before the half had ended, Liverpool made strong appeals for a penalty to be given after Claude Makelele appeared to bundle over the onrushing Steven Gerrard in the Chelsea box, however referee Steve Bennett ignored the protests. Liverpool's defensive play did manage to limit the Blues' attacking chances in the first half, with Jerzy Dudek keeping out Drogba's low shot and Luis Garcia producing a goal-line clearance from Frank Lampard's header.

Chelsea began the second half with more urgency and pegged Liverpool back. Liverpool required an excellent double save from Dudek on 54 minutes to keep themselves in front, first at full stretch from Gudjohnsen's header, then to smother William Gallas' follow-up. Soon after, Liverpool were forced to make a change, with Antonio Nunez coming on to replace the injured Harry Kewell. Despite Chelsea's possession, it was the Reds who fashioned the next clear opportunity as a Liverpool break saw Luis Garcia feed Dietmar Hamann on the edge of the box, whose low drive forced a superb save from Cech.

On 67 minutes, Liverpool were again forced into a change, with Traore succumbing to injury and being replaced by Igor Biscan. The Reds then made their final substitution on 74 minutes with Milan Baros replacing Morientes. Chelsea's search for an equaliser saw them become increasingly adventurous, and Liverpool almost capitalised to put themselves 2-0 up on 75 minutes as Gerrard almost connected with a Nunez cross at point blank range, but a tackle from Paulo Ferreira steered the ball wide.

Chelsea continued to attack Liverpool and Hamann was booked for felling Lampard just inside the Liverpool half. The resultant free kick from Ferreira was lofted towards the box and, under no pressure from Chelsea players, three Reds players jumped together for the ball and Steven Gerrard connected, looping a header beyond Jerzy Dudek to draw Chelsea level. Mourinho proceeded to goad Liverpool fans on the touchline by walking across them, putting his finger to his lips, for which he was sent to the stands by the referee.

Chelsea pressed for the winner, and Damien Duff produced a double save from Dudek with seven minutes remaining. Liverpool- having made all their substitutes- were then presented with an injury scare as Dudek required treatment from a collision that occurred from his double save, however he recovered to continue. During injury time, Milan Baros had one last chance to win it for the Reds, but he shot wildly from a tight angle to send the game to extra time.

Drogba almost headed Chelsea in front two minutes into extra-time but he saw his shot rebound off the post. Liverpool then had another opportunity to score, but Biscan could only direct his header over the bar from a Luis Garcia cross. Just seconds after the half-time interval, Drogba netted Chelsea's second goal, picking the ball up from Glen Johnson's long throw inside the six-yard box and sidefooting home. Minutes later, Chelsea had scored their third; Lampard lofted a free kick into the box that Dudek flapped at, the ball then fell to Gudjohnsen who slashed at the ball with the outside of his boot; Dudek parried the ball for Mateja Kezman to stab into the net.

One minute later, Nunez pulled the score back to 3-2. Gerrard's free kick was headed straight up in the air by Frank Lampard, and Nunez proceeded to outjump Cech to head the ball into the net. In the final minutes, Liverpool were unable to find the equaliser, and both Damien Duff and Jamie Carragher went into the book as Rafa Benitez failed to lead his side to what would have been his first piece of silverware as the new Reds boss. His first trophy did however come just three months later, in the shape of the Champions League, with his charges gaining revenge on Mourinho's Chelsea- defeating them 1-0 on aggregate in the semi finals.