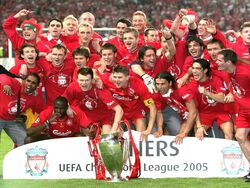 Liverpool won the 2005 UEFA Champions League Final, hosted at the Ataturk Stadium, Istanbul, by beating AC Milan 3-2 on penalties after the match finished 3-3 after extra time. The match was remarkable for the fact that AC Milan had taken a 3-0 lead in the first half, only for Liverpool to mount an impressive comeback and level the score in the space of 6 second half minutes. As such, the match is often referred to by Liverpool fans as the Miracle of Istanbul.

Liverpool's 2004-05 Champions League campaign had been a very eventful one. It began on 10 August 2004 with a two-leg qualifier against Austrian side Graz AK- Liverpool narrowly prevailing 2-1. Liverpool were drawn in a group with Olympiakos, Deportivo La Coruna and the previous season's beaten finalists, Monaco. Going into the last game of the group stage- at home to Olympiakos, Liverpool required a win by at least two goals to progress to the knockout stage. Liverpool fell a goal behind but came back to win 3-1, sealing their progress with an outstanding strike from captain Steven Gerrard. Liverpool made short work of Bayer Leverkusen in the Last 16, winning 6-2 on aggregate before being drawn against Juventus in the quarter finals. This was a landmark and emotionally-charged tie as it was the first meeting between the two sides since the Heysel Stadium disaster. Liverpool prevailed thanks to a 2-1 win at Anfield and a 0-0 draw in Turin. In the semi-finals, Liverpool were drawn against big-spending Chelsea in an all-English tie. The first leg at Stamford Bridge finished 0-0 and Liverpool narrowly edged the return tie at Anfield 1-0. This was a highly controversial victory as there was much debate as to whether Luis Garcia's winning goal had actually crossed the line or not. Regardless, Liverpool sealed their place in the final against Italian giants AC Milan.

This was the sixth time Liverpool had reached the final of the European Cup, and the first since 1985, more widely remembered as the setting for the Heysel disaster which cost Liverpool participation in Europe for six years. Milan had narrowly lost out on their League title, whilst Liverpool had finished a disappointing fifth in the debut season of manager Rafael Benitez. Liverpool and Milan were allocated 20,000 tickets each for the match, however it is clear that many more Liverpool fans acquired tickets, and they vastly outnumbered their Italian counterparts.

Liverpool opted to continue to field the 4-4-1-1 formation that manager Rafael Benitez favoured with Milan Baros given the lone striker role. To the surprise of many, Liverpool began the match with Harry Kewell in the starting line up, who had spent much of the 2004-05 season injured. From the kick-off, AC Milan took the lead within a matter of seconds. Liverpool left back Djimi Traore conceded a free kick for fouling Milan playmaker Kaka on Milan's right flank. Andrea Pirlo whipped the ball into the Liverpool box where Milan's veteran captain Paolo Maldini scored a volley. Liverpool responded well to the setback however, and Sami Hyypia tested Milan 'keeper Dida with a powerful header moments later from a dangerous Gerrard cross. Unfortunately for Liverpool, Harry Kewell suffered injury in the 18th minute, forcing them into making a change- bringing on substitute Vladimir Smicer. Liverpool then survived a scare when Milan striker Andriy Shevchenko was played in on goal, slotting into the bottom corner- only for the assistant to flag for offside. Replays showed Shevchenko had indeed drifted into a marginally offside position. Liverpool however were left to feel aggrieved soon after when Luis Garcia dribbled into the Milan box but was stopped by a sliding challenge from Alessandro Nesta, with the ball appearing to strike the Italian centre-back's arms. The appeals were waved away and Milan launched a swift counter attacking move, which saw a neat exchange of play between Kaka, Andriy Shevchenko and Hernan Crespo resulting in the latter finishing low at close range to put Milan 2-0 up. They scored their third goal five minutes later and two minutes before half time, as Kaka split the Liverpool defence with a superb pass that put Crespo through on goal, who expertly chipped Liverpool 'keeper Jerzy Dudek.

Despite their team's dire situation, the sizeable Liverpool support could be heard vociferously singing You'll Never Walk Alone during the half time break. At the start of the second half, Liverpool brought on midfielder Dietmar Hamann for right back Steve Finnan, altering their 4-4-1-1 formation to a 3-1-4-1-1. Liverpool had an early scare as Kaka bore down on goal, only for Hyypia to bring the playmaker down just outside the box. Shevchenko drilled a vicious shot at goal from the resulting free kick that Dudek did well to put behind for a corner. However, Liverpool's luck began to change and in the 54th minute, Liverpool captain Steven Gerrard pulled a goal back for Liverpool, scoring a looping header from a John Arne Riise cross. Liverpool immediately put together another move in the Milan half and a flick from Garcia found Baros in the box. The assistant referee flagged for offside against Baros, however the referee failed to spot the raised flag. As play continued, Hamann teed up Vladimir Smicer on the edge of the box to score a low, long range effort that just crept in under Dida. Just four minutes later, Liverpool completed their unlikely comeback. Gennaro Gattuso was judged to have fouled Steven Gerrard in the box when the Liverpool skipper burst through on goal and the referee awarded a penalty. Xabi Alonso's effort was saved by Milan 'keeper Dida, but Alonso scored the rebound. Liverpool almost fell behind 10 minutes later as Dudek spilled Kaka's cross into the path of Andriy Shevchenko, however his shot was blocked on the line by Djimi Traore. The resulting corner was put narrowly wide by Jaap Stam.

With the scores level, the game went into extra time. Just three minutes from time, Jerzy Dudek pulled off an outstanding, instinctive double-save from Andriy Shevchenko at point-blank range, first blocking a low header from the Ukrainian, and then punching clear his follow-up volley. Liverpool had one more opportunity to settle the tie before penalties when Vladimir Smicer was brought down by Rui Costa just outside the Milan box. The free kick was teed up for Riise, but his strike was blocked and the game went to penalties.

In the penalty shootout, Jerzy Dudek attempted to distract the Milan players by utilising the 'spaghetti legs' technique used famously by former Liverpool 'keeper Bruce Grobbelaar. Milan were first to take a penalty, which was put over the crossbar by Serginho. Dietmar Hamann scored Liverpool's first penalty, revealing later that he did so despite a broken toe. Dudek saved Milan's second penalty, taken by Andrea Pirlo, and Liverpool took a 2-0 lead when Djibril Cisse scored his penalty. Jon Dahl Tomasson scored to reduce the deficit to 2-1, and Dida subsequently saved Liverpool's third spot kick, taken by John Arne Riise. Kaka levelled the score with his penalty, but Smicer restored Liverpool's advantage. Shevchenko needed to score his penalty to keep Milan in the competition, but Dudek saved his shot which went straight down the middle, handing Liverpool victory and with it, their fifth European Cup.

As this was Liverpool's fifth European Cup victory, as per UEFA rules, Liverpool were permitted to keep the trophy itself, instead of being awarded a replica. A new Champions League trophy was therefore commissioned for the 2005-06 season.

Steven Gerrard was awarded the official man of the match award, and proclaimed, amidst speculation that he might transfer to Chelsea, that 'How can I think of leaving Liverpool after a night like this?'

It is estimated the bookmaker industry in Britain suffered losses of over £2,000,000 after a number of bets were placed on Liverpool emerging victorious when 3-0 down, when bookmaker Ladbrokes for instance had priced Liverpool at 100/1 to win.

Liverpool faced the UEFA Cup winners, CSKA Moscow, in August in the UEFA Super Cup match, which Liverpool won 3-1. Liverpool also participated in the FIFA Club World Cup, beating Deportiva Saprissa 3-0 in the semi final, before losing 1-0 to Sao Paulo in the final after having three goals disallowed. 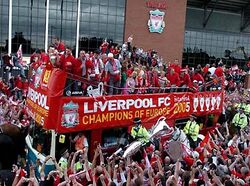 The Liverpool team returned to Liverpool on Thursday 26 May and were greeted by over 750,000 fans as they boarded an open-top bus from John Lennon airport. The bus toured the city of Liverpool, enabling the players to parade the Champions League trophy. By the time the bus reached St. George's Hall, over 300,000 people had congregated to cheer the squad.

The Queen sent a message to the Liverpool squad, telling them "congratulations on your remarkable win last night. It was a magnificent achievement which will be remembered for many years both in Liverpool and across the country." Turkish prime minister Recep Tayyip Erdogan telephoned British prime minister Tony Blair to offer his congratulations, and Tony Blair himself passed on a message to the Liverpool squad, stating "unbelievable. Incredible. Brilliant. The whole country is very proud of you. Wasn't it absolutely amazing? Anyway, Liverpool can be very proud of itself and Britain's very proud of Liverpool." The prime minister's wife, Cherie Blair, added her congratulations, too: "I am absolutely delighted of course as a Liverpool girl. It is a fantastic news for the whole city and the whole country." Leader of the opposition, Michael Howard added "three-nil down at half-time I thought oh dear, all the dreams are going to dissolve, but what a second half, they were unbelievable." 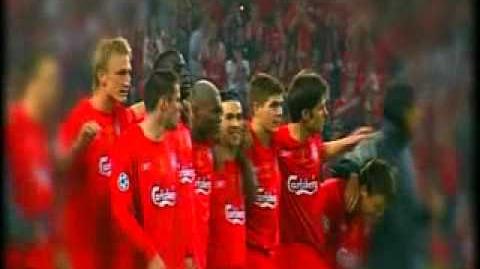