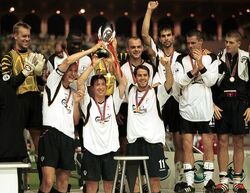 Liverpool won the 2001 UEFA Super Cup on 24 August 2001 with a 3-2 victory over European Champions, Bayern Munich. The match took place in the Stade Louis II stadium, in Monaco. The Reds qualified due to their victory over Alaves in the UEFA Cup final three months prior.