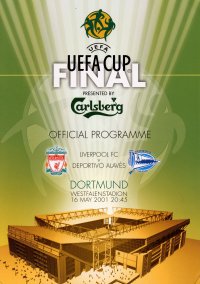 Liverpool won the 2001 UEFA Cup Final, beating Deportivo Alaves of Spain 5-4 after extra time on 16 May 2001 in Dortmund. The UEFA Cup was the third trophy won by Liverpool in their treble-winning 2000-01 season, and came just four days after their FA Cup win.

Liverpool reached the final of the 2001 UEFA Cup after knocking out European giants Roma, Porto and Barcelona in the preceding rounds. Alaves however were a much less well-renowned club, this being their first season ever in European competition. They progressed to the final as one of the highest scoring teams in the competition, scoring at least 4 goals in each of their ties and putting nine goals past Kaiserslautern in the semi finals across the two legs. This set the tone for the final, which was to be one of the highest scoring in recent European history.

Liverpool took the lead in only the fourth minute, as Gary McAllister whipped in a free kick from the right for left back Markus Babbel to rise highest and head home. Emile Heskey almost doubled Liverpool's lead after being put through on goal by McAlliser, however his shot was well saved. Alaves were awarded a free kick in the 12th minute after a foul by Stephane Henchoz, but the shot was saved by Sander Westerveld. Soon after, in the 16th minute, a careless pass from the Alaves midfield was cut out by Dietmar Hamann. He found Michael Owen in space who played Steven Gerrard through on goal who struck cleanly underneath the goalkeeper to double Liverpool's advantage. Alaves made an early substitution in an attempt to turn the match around, and soon after, they did pull a goal back through the newly-introduced Ivan Alonso in the 27th minute, as he outjumped Babbel to head a right wing cross past Sander Westerveld. Alaves proceeded to launch an onslaught on the Liverpool goal, and it was up to Westerveld to keep the tie in Liverpool's favour as he made an impressive double-save from the Alaves forward line. In the 41st minute however, Liverpool restored their two-goal advantage. Dietmar Hamann played a superb long ball through the centre of the pitch that put Michael Owen through on a goal, however he was brought down under the challenge of Alaves 'keeper Martin Herrera. Referee Gilles Veissière awarded a penalty, which McAllister took and scored.

Alaves began the second half in the ascendancy. In the 48th minute, Romanian right wing back Cosmin Contra jinked his way around Jamie Carragher on the Alaves right and sent in a superb cross that was headed in by striker Javi Moreno. Four minutes later, Alaves drew level. Stephane Henchoz conceded a free kick just over 20 yards out, which Moreno drilled low, through the wall, into the net. Liverpool responded with substitutions, bringing on Vladimir Smicer for Henchoz and Robbie Fowler for Heskey. After just nine minutes on the pitch, Fowler put Liverpool 4-3 ahead. He was found on the edge of the area by McAllister, took the ball square into the box and fired accurately, low into the bottom corner. In an attempt to see the match through, Gerard Houllier brought off Michael Owen for midfielder Patrik Berger, however with just one minute of normal time remaining, Alaves drew level for a second time. Sander Westerveld conceded a corner, which was whipped in from the right and headed home at the near post by Jordi Cruyff, son of Dutch legend, Johan Cruyff.

In the fourth minute of extra time, Alaves thought they had scored the golden goal after Ivan Alonso put the ball in the back of the net, however it was ruled out for offside. Five minutes later, Alaves were reduced to ten men as Magno Mocelin picked up a second yellow card for an unfair challenge on Babbel. Just before half time of extra time, Fowler put the ball in the net, but like Alonso, his goal was ruled out for offside. With four minutes of the tie remaining, Alaves were reduced to nine men when defender and captain Antonio Karmona saw red for a second bookable offence after bringing down Vladimir Smicer. Gary McAllister took the resulting free kick, which he whipped in from the left and found the head of Alaves left back Delfi Geli, who put the ball past his own keeper, scoring the golden goal and handing the UEFA Cup to Liverpool.

In the aftermath of the game, various pundits and journalists were claiming the final to be one of, if not the best ever in European competition. Former Liverpool player and pundit Alan Hansen stated the match was "the best final ever." Describing Gary McAllister, who was directly involved in four of Liverpool's five goals, he said: "The best player on the pitch was also the oldest. Gary McAllister was outstanding. At 36, to keep going the way he did, keep taking those freekicks and producing it when it counted, was sensational. He fully deserved his man of the match award."