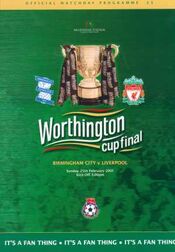 Liverpool won the 2001 League Cup Final, hosted at the Millenium Stadium, Cardiff, by beating Birmingham City 5-4 on penalties after the match finished 1-1 after extra time. This was the first final held at the Millenium Stadium, which hosted a series of English football finals in the early 2000s whilst Wembley Stadium was being rebuilt. It became a happy hunting ground for Liverpool, who would revisit contesting for silverware on a further seven occasions over the next five years.

Liverpool's route to the final began on 1 November 2000 with an all-Premier League encounter with Chelsea. Hosted at Anfield, the game was tied after 90 minutes at 1-1 however Liverpool claimed victory with a 104th minute strike from Robbie Fowler. Their reward was a fourth round tie away to Stoke, who Liverpool thrashed 8-0, with Fowler claiming a hattrick in the match. In the quarter finals, Liverpool beat Fulham 3-0 at Anfield, however all three goals came in extra time as the tie finished 0-0 after 90 minutes. Liverpool suffered a scare in the semi-finals as they lost the first leg 2-1 away to Division One side Crystal Palace, however a 5-0 victory in the return leg sealed the Reds' place at the Millenium Stadium. This was Liverpool's first final since the 1996 FA Cup.

Birmingham City- a Division One side at the time- progressed to the final following victories over Southend, Wycombe, Sheffield Wednesday and three Premier League sides- Tottenham, Newcastle and Ipswich.

Gerard Houllier juggled his starting line up with Liverpool competing on four different fronts, and Steven Gerrard was the surprise choice on the teamsheet as he had recently suffered a groin injury. Liverpool started the match well, and almost took the lead in only the seventh minute as Vladimir Smicer sent a good cross from the left flank into the box, however the unmarked Robbie Fowler failed to make contact with the ball at the near post and Birmingham cleared for a corner. Over the coming minutes, the match was fairly even with both Liverpool and Birmingham enjoying possession but few opportunities were being created. On 28 minutes, Birmingham pressure forced a weak punch from Liverpool keeper Sander Westerveld, however he was able to save the follow up effort from Jon McCarthy. Almost immediately afterwards, Liverpool broke the deadlock. Westerveld sent a long clearance downfield which was flicked on by Emile Heskey for Fowler to unleash a fierce dipping volley from 25 yards that struck the back of the net. Liverpool pushed for a second as the first half drew to a close. On 41 minutes, Smicer struck from the edge of the area, however his shot was deflected for a corner. The Czech international was then guilty of missing a one-on-one opportunity as he was put through on goal after Heskey flicked on a Stephane Henchoz clearance, however he put his shot wide.

At half time, Birmingham brought on young striker Andy Johnson and it almost paid immediate dividends as Johnson headed Nicky Eaden's cross only inches wide of the goal on 46 minutes. Liverpool immediately hit back however and a last-minute block from Darren Purse was required to prevent Fowler firing home after being set up by Markus Babbel. Birmingham appeared rejuvenated however Liverpool were still the side creating the better chances. Fowler, Heskey and Smicer all had opportunities for Liverpool, whilst Geoff Horsfield and Stan Lazaridis posed questions for the Liverpool defence. On 76 minutes, Gary McAllister came on to replace Steven Gerrard and then seven minutes later Nick Barmby replaced Smicer as Birmingham appeared to be running out of ideas to make their breakthrough. However, they were gifted a way back into the match in injury time when Stephane Henchoz recklessly brought down Martin O'Connor in the box. A penalty was awarded, which Darren Purse- struggling with cramp during the latter stages of the match- fired home.

The goal sent the match into extra time, and only five minutes in, Liverpool made their final substitution- bringing on Christian Ziege for Igor Biscan. Buoyed by their goal, Birmingham made a bright start as Johnson, McCarthy and Bryan Hughes all had chances to put the Blues ahead. Bryan Hughes- a boyhood Everton fan almost netted Birmingham's second on 99 minutes with a 30 yard chip, however Westerveld reached the shot and tipped it over with his fingertips. Five minutes later, Henchoz almost cost Liverpool a second penalty as he hauled down Johnson, however the referee waved play on- much to the surprise of most watching on. With nine minutes to go, Liverpool began to push for their winner when Fowler brought a good save out of Birmingham keeper Ian Bennett with a close-range header. Bennett then produced another good save to deny Sami Hyypia's header from a Ziege free-kick. With four minutes to go, Dietmar Hamann struck the post with a 25 yard shot on goal, however neither side were able to find a way through and the match went to penalties.

Gary McAllister took Liverpool's first spot kick, and he planted his shot confidently into the top corner of the net. Martin Grainger took Birmingham's first kick, however Westerveld guessed correctly and saved the penalty by diving to his left. Nick Barmby then put Liverpool 2-0 up with a similar strike to McAllister's. Darren Purse put Birmingham on the scoresheet, and Ziege netted Liverpool's third with a powerful effort. Marcelo kept up Birmingham's chase in confident style, and Bennett then produced an excellent save to keep out Hamann's fierce effort. Stan Lazaridis brought Birmingham level at 3-3, however Robbie Fowler netted Liverpool's fifth spot kick. Hughes equalised for Birmingham to send the shoot-out to sudden death. Jamie Carragher stepped up for Liverpool to hammer home into the roof of the net, and Sander Westerveld then saved Andy Johnson's effort to win Liverpool the trophy.

This was Liverpool's first trophy win since the 1995 League Cup, however it served as the catalyst for a fruitful period for Liverpool in the early 21st Century. This trophy was the first of Liverpool's famous treble win in the 2000-01 season, which also included the FA Cup and UEFA Cup. Liverpool also added the Super Cup and Charity Shield to these to bring their trophy haul to a total of five for the calendar year 2001.

Later, defender Jamie Carragher would recall: "People remind me about my run-up for the penalty I took in the shootout and how it must go down as the longest in history. It was sudden death but I didn’t have any nerves. I knew where I wanted to put it and thankfully it went in. My Dad missed the moment, though. He left his seat because he couldn’t watch. It had been a difficult game but we battled through and deserved it. It was my first trophy with the senior Liverpool team and it was the catalyst for us to go on and win the cup Treble. Gerard Houllier told us to remember how winning felt and urged us to use it as an inspiration. It was and we did."