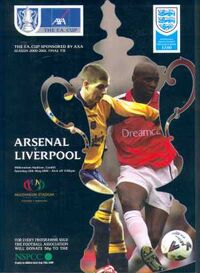 Liverpool won the 2001 FA Cup Final, beating Arsenal 2-1 on 12 May 2001 in Cardiff. The FA Cup was the second trophy won by Liverpool in their treble-winning 2000-01 season. Liverpool were put under pressure for long periods of the match by league runners-up Arsenal, who eventually took the lead in the 72nd minute through Fredrik Ljungberg, only for a brace from Michael Owen to turn the tie around in Liverpool's favour in the final seven minutes of the match.

The first incident of note occurred after six minutes, when Emile Heskey fell to ground under a challenge from Gunners' defender Gilles Grimandi in the box. Referee Steve Dunn waved away the penalty protests, however Arsenal fans were next to be felt hard-done by as the referee and his assistant, Kevin Pike failed to spot a clear- albeit seemingly accidental- handball from Stephane Henchoz, after a Thierry Henry shot hit his outstretched arm on the line. Thierry Henry missed two other good chances as Arsenal failed to turn their substantial possession into goals. Liverpool soaked up Arsenal's play and launched quick counter-attacks with the aim of releasing the pacey Michael Owen up front. Sami Hyypia had a particularly outstanding game at the back, clearing no fewer than three Arsenal shots off the line, helping to keep the tie goalless for the bulk of the match.

Liverpool began the second half well, and Heskey had a good header from a Danny Murphy free kick saved by Gunners' 'keeper David Seaman, however this was a rare moment of dominance from the Reds and it was Arsenal who eventually took the lead in the 72nd minute. Liverpool 'keeper Sander Westerveld's poor clearance found its way eventually to Arsenal playmaker Robert Pires, who fed Ljungberg to slot into the net. Westerveld did make amends soon after however with a terrific point-blank save from Henry, keeping the score at 1-0. By now however, with Gary McAllister, Robbie Fowler and Patrik Berger having all been brought on from the substitutes' bench, Liverpool had began to get back into the match. After surviving an onslaught from the Arsenal attack immediately following Ljungberg's goal, Michael Owen restored parity, pouncing on a loose ball in the Arsenal box that had not been cleared following a McAllister free kick. Five minutes later, in the 88th minute, Owen put Liverpool ahead after latching onto a superb long ball from Patrik Berger on the left flank, and firing low across the face of goal. Liverpool held on to claim a famous victory over their North London rivals.

After the match, manager Gerard Houllier gave this assessment: "Our play was not good [in the first half] - we were struggling with the heat. Still, I thought we could score on set-pieces and as soon as Michael scored I said we would win it."

Liverpool captain Jamie Redknapp had been out for most of the season with a long-term injury. However he was invited to lift the trophy with the team along with stand-in captain, Sami Hyypia.