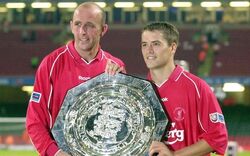 Liverpool participated in the 2001 FA Charity Shield against 2000-01 Premier League champions Manchester United, having won the 2001 FA Cup Final. Hosted at the Millenium Stadium, Cardiff, Liverpool won the match 2-1 to claim their 14th Shield, and 9th as outright winners. Goals from Gary McAllister and Michael Owen sealed the victory for the Reds.

Gerard Houllier chose to start his preferred XI in the traditional curtain raiser to the season, with Robbie Fowler not even being involved in the 18 man squad.

The Reds kicked on early, and won a penalty through Danny Murphy, which was converted by Gary McAllister. Just later, United missed their first chance, with Van Nistelrooy scuffing his shot. In the 11th minute, the lead was nearly doubled, with Nicky Butt almost directing it into his own net. Just five minutes later, the lead was doubled as Heskey headed the ball down for Owen, allowing him to easily place it into the United net.

Later on, Roy Keane's header was well saved by Westerveld, and Silvestre's shot deflected off the arm of Henchoz, but the referee denied them the penalty. United continued to dominate possession, and in the 36th minute, Keane's shot rattled the crossbar, but they still couldn't get the goal.

United started the second half as they ended it, attacking the Liverpool defence, with Van Nistelrooy squandering two chances in as many minutes. However, the Red Devil's finally got a goal back in the 51st minute, with the Dutch striker rounding Westerveld and slotting it into the net. United turned to Dwight Yorke in an attempt to find the equaliser, as Beckham missed great chances. Shortly after, Houllier introduced Biscan and Berger in an attempt to gain control of the game, leading to the Red's first chance of the half, in the 81st minute, with Biscan putting it wide.

With minutes remaining, Henchoz was involved in yet another handball controversy, with the referee denying the United calls once again. United failed to create anymore big chances, and the Charity Shield went to Liverpool.

For an impressive display in goal, Liverpool's Sander Westerveld was awarded the man of the match award.

This was the Red's third consecutive win over the champions, and their fourth trophy of 2001, which gave the fans a lot of hope that they would finally be able to challenge for the Premier League title in the 2001-02 season. The match however, was slightly overshadowed by the exclusion of Robbie Fowler, which Houllier admitted was because of a training ground bust-up between Fowler and assistant manager Phil Thompson, sparking speculation over the striker's future at the club.