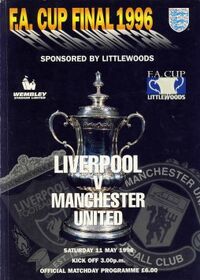 Liverpool lost the 1996 FA Cup Final, falling to a 1-0 defeat to bitter rivals Manchester United on 11 May 1996 at Wembley. The match was a fairly unremarkable affair, with both sides cancelling each other out for most of the match. The teams were only separated five minutes from time, when Eric Cantona produced a moment of brilliance to hand his team victory. Today, the match is mostly remembered for the infamous cream suits paraded by the Liverpool players before kick off. This match would prove to be Liverpool's last at the old Wembley Stadium, and last at Wembley full stop until the 2012 League Cup Final, 16 years later. 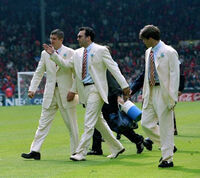 Liverpool began their 1995-96 FA Cup campaign in imperious form, hammering Rochdale 7-0 in the third round and then beating Shrewsbury 4-0 in the fourth round. Victories against Charlton, Leeds and Aston Villa then secured Liverpool's place in the final against newly-crowned league champions, Manchester United.

Before kick-off, the Liverpool players- in what has proved to be a notorious move- chose to parade around the Wembley pitch donning Armani cream-coloured suits and Gucci shoes (pictured), derided by many as a 'crime against fashion.' This move earned the squad the media nickname of 'The Spice Boys.' In a recent interview, ex-Liverpool player Robbie Fowler blamed the choice of outfit on then-goalkeeper, David James, arguing the suits were his idea. In 2002, Liverpool fans voted the cream suits spectacle 80th in the 100 Days That Shook The Kop poll.

Although the match would prove to be a fairly mundane affair, it did begin at a high tempo, with David Beckham testing Liverpool 'keeper David James early on with a vicious strike from the edge of the box. Liverpool's first good chance came via good work by Steve McManaman on the Liverpool left, who drove a low ball into the box, where Mark Wright teed up Jamie Redknapp for a strike at goal similar to Beckham's, but Redknapp put his shot over the bar.

In the second half, Liverpool needed a superb save from James to keep the score level. Eric Cantona caught the ball with an acrobatic volley at close range, which James athletically dove down to keep from going in the bottom corner. Despite his good work however, an error of judgement from James ultimately gave Man Utd their breakthrough. In the 85th minute, a corner was whipped in that James rushed off his goalline to punch clear. His clearance fell to Cantona on the edge of the area, who volleyed into the unguarded net. Manchester saw through the remaining few minutes of the match to condemn Liverpool to defeat.