The 1990-91 season was Liverpool's 99th season of football since they were established. Liverpool followed up the 1989-90 league championship winning season by being runners-up, finishing 7 points off the lead. The season started with a club record winning streak, but there would be 8 league defeats by season's end, including both fixtures against eventual champions Arsenal. A 2-1 defeat to Nottingham Forest, in the penultimate league game, finally ended the possibility of finishing in top spot.

The domestic cup competitions were less successful for Liverpool, as they were dismissed in the fifth and third rounds in the FA Cup and League Cup respectively.

Ian Rush's good scoring rate in all competitions was backed up by John Barnes and Peter Beardsley, who chipped in with 31 goals between them. 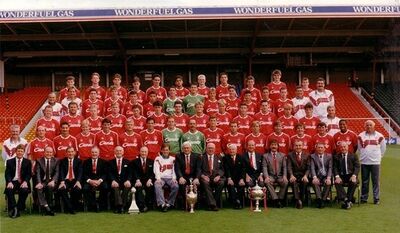 Retrieved from "https://liverpoolfc.fandom.com/wiki/1990-91_season?oldid=17723"
Community content is available under CC-BY-SA unless otherwise noted.