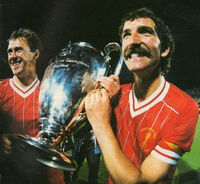 Liverpool won the 1984 European Cup Final, beating Roma on a penalty shoutout after a 1-1 on 30 May 1984. The match took place in Roma’s Home stadium, the Stadio Olimpico, where Liverpool had previously won the 1977 final. The Reds had already won the League and the League Cup earlier in the season, so victory completed an unprecedented treble.