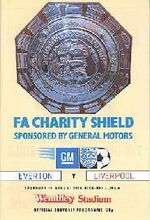 Liverpool participated in the 1984 FA Charity Shield against the 1984 FA Cup winners Everton, having won the 1983-84 First Division. Hosted at Wembley Stadium, London, Liverpool lost the match 1-0 thanks to a bizarre own goal from 'keeper Bruce Grobbelaar. This was only the second time the Charity Shield had played host to the Merseyside Derby, with Everton gaining revenge for their 1-0 defeat to the Reds in 1966.

Everton took the match following a commanding performance in which the only goal of the game came off hapless Liverpool 'keeper Bruce Grobbelaar in the 55th minute. He had initially done well to get down low and parry Graeme Sharp's shot, but the ball still fell to Sharp's feet who's second shot was blocked by Reds centre back Alan Hansen off the line. The rebounded ball then struck Grobbelaar, who had just gotten himself up off the floor and into the net.