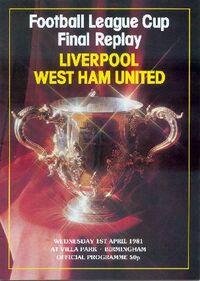 Liverpool won the 1981 League Cup Final, beating West Ham United 2-1 in a replay match on 1 April 1981 at Villa Park, having drawn the original match 1-1 on 14 March 1981. This was Liverpool's second League Cup final appearance, and their first triumph in the competition.

The original tie at Wembley was drawn 1-1 after going to extra time. Alan Kennedy's 118th minute goal looked to have won it for Liverpool, but a goal from Ray Stewart for West Ham United meant that the final would have to be replayed. Liverpool went behind early in the replay at Villa Park, but first half goals from Kenny Dalglish and Alan Hansen put Liverpool into the lead, which they hung on to, sealing their first League Cup win.