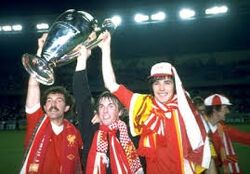 Liverpool won the 1981 European Cup Final, beating Real Madrid 1-0 on 27 May 1981 in Paris. This win salvaged the season for Liverpool, finishing just 5th in the league. They had however won the League Cup, beating West Ham in the replay at Villa Park.

Bob Paisley became the manager to have won the most European Cups, with three. This record still stands, but Carlo Ancelotti has equalled it.