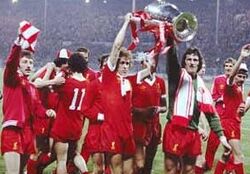 Liverpool won the 1978 European Cup Final, beating Club Brugge of Belgium 1-0 on 10 May 1978 in London. Liverpool and Brugge had met two years prior in the 1976 UEFA Cup Final, with the Reds prevailing on that occasion as well. The European Cup was the only trophy won by the Reds in the 1977-78 season after Liverpool had finished runners up in the First Division, and failed to win either of the domestic cups. A crowd of 90,000 descended on Wembley to watch the match, the vast majority being Liverpool fans.

Despite the tight scoreline, Liverpool had dominated the majority of the match, and would likely have won by a greater margin had it not been for the sterling performances of the Brugge central defence and their goalkeeper, Birgir Jensen. Early on in the first half, Kenny Dalglish was put through on goal but Jensen dove at his feet to claim the ball, with Liverpool making some appeals for a penalty. Dalglish and Jimmy Case in particular caused problems for Brugge, while Souness and McDermott pulled the strings from the midfield.

Liverpool came close to taking the lead on numerous occasions during the first half. Case completed an impressive run down the right flank, beating the Brugge left back before squaring the ball for Dalglish, who would have had an easy tap-in had it not been for a last-ditch block from the outstretched leg of the Brugge centre back. Soon after, Ray Kennedy found the ball in the box, but shot across the face of goal and Jimmy Case then saw a well-struck free kick saved by Jensen. Souness attempted a superb volley from the edge of the area that went narrowly over before Alan Hansen had a fine header saved.

With the game still goalless, the second half began in much the same vein as the first. Terry McDermott was put through on goal and, with only the 'keeper to beat, shot low, straight at Jensen for an easy save. The deadlock was finally broken in the 64th minute when Graeme Souness played a through ball to Kenny Dalglish in the box, who shot across the face of goal, nestling the ball in the bottom left corner. Liverpool remained dominant for the remainder of the match, however in the closing stages, a defensive mistake from Alan Hansen allowed Brugge strike pair Jan Sorensen and Jan Simeon through on goal. The latter took the ball around Reds 'keeper Ray Clemence, but saw his goal-bound shot cleared off the line by a superb block from Phil Thompson. Liverpool held on to claim their second European Cup in two years.

Liverpool became the first British club to retain the European Cup, having won the competition in 1977.