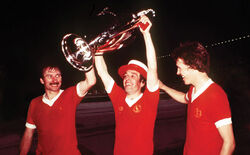 Liverpool won the 1977 European Cup Final, beating Borussia Monchengladbach 3-1 on 25 May 1977 in Rome. Borussia Monchengladbach were, incidentally, the club beaten by Liverpool in their first UEFA Cup final win in 1973. This win rounded of a good season for Liverpool adding to their second consecutive League title. They however missed out on the 'treble' by losing to Manchester United in the FA Cup final the weekend before the European Cup final.

Bob Paisley became the first person to manage a club to victory in the European Cup after winning the UEFA Cup in the preceding year. Rafael Benitez later did this with Valencia (UEFA Cup) and Liverpool (UEFA Champions League).