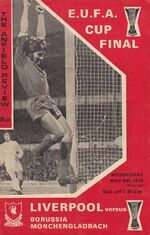 Liverpool won the 1973 UEFA Cup Final, beating German side, Borussia Monchengladbach 3-2 on aggregate. The final was a two-legged tie, with thr first leg at Anfield, and the second at the Bokelbergstadion. Liverpool handily won the first leg, putting the German side away with a comfortable 3-0 victory. Two weeks later, the Reds suffered a 2-0 defeat away from home, but held on to secure their first ever European honour. The two sides later met again in the 1977 European Cup Final, with Liverpool once again coming away the victors.

This victory meant Liverpool had completed a double, having already won the league title. This made them the first English side to win a European trophy while also winning their own division.

Liverpool progressed through their UEFA Cup campaign relatively easily, passing through to the semi-final having conceded just twice. Their toughest test was against league rivals Tottenham, who were the defending champions. An Alec Lindsay strike was the difference in a 1-0 win at Anfield, and two weeks later the Reds reached the final, going through on the away-goals rule despite suffering a 2-1 defeat at White Hart Lane. This was just Liverpool’s second European final, having suffered a loss to Borussia Dortmund in the Cup Winners Cup seven years earlier.

Monchengladbach had an even simpler run to the final, dominating all opposition. They scored at least five goals against each side they met, and their smallest aggregate victory was a 5-1 win over FC Twente in the semi-final.